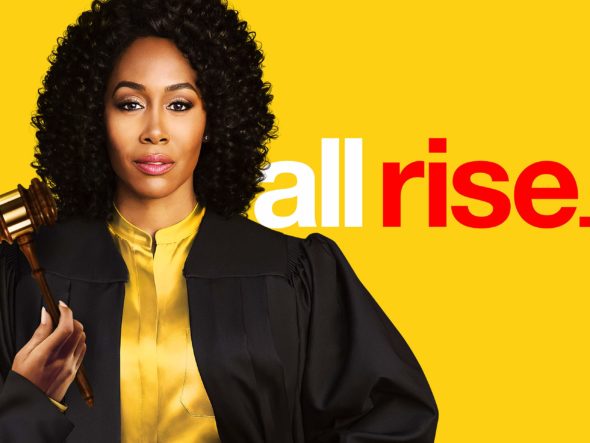 Judge Lola Carmichael is headed back to the bench. The OWN cable channel has revived the All Rise legal drama series for a third season of 20 episodes. The show aired for two seasons on CBS before being cancelled in May.

A premiere date for season three of All Rise will be announced at a later time. In addition to airing on OWN, the third season episodes will also be available on Hulu and HBO Max. The first two seasons will be available on the streaming services beginning December 1st.

Here’s some additional information from OWN:

“ALL RISE” RECONVENES ON OWN: OPRAH WINFREY NETWORK

Los Angeles – OWN: The Oprah Winfrey Network announced today the pickup of NAACP Image Award-nominated Warner Bros. Television courtroom drama “All Rise” for a 20-episode third season slated to air on OWN in 2022. The Simone Missick-fronted series comes to the network following two seasons on CBS. Dee Harris-Lawrence the executive producer/showrunner of OWN and WBTV’s Peabody Award–winning drama “David Makes Man,” is executive producer and showrunner for “All Rise,” with series star Simone Missick, who has twice been nominated for NAACP Image Awards for her work as Judge Lola Carmichael, serving as an executive producer for season three. OWN will also air seasons one and two in advance of the launch of season three.

Additionally, HBO Max and Hulu have acquired subscription streaming rights to all episodes of “All Rise” via a deal with Warner Bros. Domestic Television Distribution. Viewers will be able to catch up on the first two seasons of “All Rise” on both Hulu and HBO Max beginning December 1, 2021, in advance of the show’s third season debut on OWN. And the third season of “All Rise” will be available on both HBO Max and Hulu after it airs on OWN in 2022. Season three premiere dates are to be determined.

“All Rise has been a great performer, achieving strong ratings and growing its share from season one to two. Featuring a strong character front and center, Judge Lola Carmichael’s story reflects our audience with powerful affirmation,” said Tina Perry, president, OWN: Oprah Winfrey Network. “A special thanks to Warner Bros. Television and our incredible showrunner and longtime partner Dee Harris-Lawrence. We can’t wait to get started on season three and bring this show back for long-standing and new fans alike.”

Brett Paul, President, Warner Bros. Television, said: “We are incredibly thrilled that ‘All Rise’ will be back in court, and we are so thankful to our great partners at OWN for ruling in favor of another season of this powerful drama. Dee Harris-Lawrence and the creative team have done an incredible job of telling important stories about timely subjects which have been brought to life by Simone Missick and the show’s outstanding ensemble cast. We can’t wait for audiences to see what the ‘All Rise’ team has in store for season three. And we are also grateful to our partners at HBO Max and Hulu, without whose support this would not be possible.”

“All Rise” is a courthouse drama that follows the chaotic, hopeful, and sometimes absurd lives of its judges, prosecutors, and public defenders, as they work with bailiffs, clerks, and police to get justice for the people of Los Angeles amidst a flawed legal system. Among them is newly appointed ‘Judge Lola Carmichael’ (Simone Missick), a highly regarded and impressive former deputy district attorney who doesn’t intend to sit back on the bench in her new role, but instead leans in, immediately pushing the boundaries and challenging the expectations of what a judge can be.

Please join the conversation at @OWNTV and #allrise

About OWN: Oprah Winfrey Network
OWN: Oprah Winfrey Network is the first and only network named for, and inspired by, a single iconic leader. Oprah Winfrey’s heart and creative instincts inform the brand and the magnetism of the channel. OWN is a leading destination for premium scripted and unscripted programming from today’s most innovative storytellers. OWN connects with its audience wherever they are, inspiring conversation among a global community of like-minded viewers on social media and beyond. Launched on January 1, 2011, OWN is a joint venture between Harpo, Inc. and Discovery, Inc. The venture also includes award-winning digital platform Oprah.com. Access OWN anytime on Watch OWN and discovery+ across mobile devices and connected TVs.

About Hulu
Hulu is the leading premium streaming service offering live and on-demand TV and movies, with and without commercials, both in and outside the home. As part of Disney’s Media and Entertainment Distribution segment, Hulu is the only service that gives viewers instant access to current shows from every major U.S. broadcast network; libraries of hit TV series and films; and acclaimed Hulu Originals like Emmy® and Golden Globe® Award-winning series The Handmaid’s Tale and The Act; Golden Globe Award-winning, Emmy Award-nominated and Peabody-winning series Ramy; and Emmy Award-nominated series Pen15 alongside hit series Little Fires Everywhere from Reese Witherspoon and Kerry Washington, Normal People, The Great, Hillary and Solar Opposites; Oscar® and Emmy nominated documentary film Minding the Gap, Golden Globe-Award winning and Oscar-nominated The United States Vs. Billie Holiday, and critically acclaimed Hulu Original films Palm Springs, Run and Happiest Season. The service also streams live news, entertainment and sports from 20th Television, The Walt Disney Company, NBCUniversal, CBS Corporation, The CW, Turner Networks, A+E Networks and Discovery Networks – available all in one place.

About HBO Max
HBO Max™ is WarnerMedia’s direct-to-consumer streaming platform, offering best in class quality entertainment. HBO Max features the greatest array of storytelling for all audiences from the iconic brands of HBO, Warner Bros., DC, Cartoon Network, Adult Swim, Turner Classic Movies and much more. The platform launched in the United States in May 2020 and introduced a lower priced, advertising-supported tier in June 2021. HBO Max recently began its global rollout launching in 39 markets across Latin America and the Caribbean, and HBO Max will enter Europe later this year and into next as it begins replacing the HBO-branded streaming services.

Check out our status sheets to track new TV series pickups, renewals, and cancellations. You can find lists of cancelled shows here.
What do you think? Did you watch the All Rise TV series on CBS? Are you glad to hear that it’s been renewed for a third season on OWN?

Nice to see somebody who cares about great TV. Way to go!

Omg, I am so happy that it got renewed on another channel! I was shocked that it got cancelled in the first place.

but it is OWN that took it over… need it back on TV so we can finish watching what happens to them all! bloody $$ racket.. these stations are! 🙁

They can keep it, and take others with it! TV would be watchable again.

This is the best news I’ve read in awhile. I was so upset when CBS cancelled it because it’s an excellent show with a very diverse cast of talented actors. Now, if they could pick up the cancelled ABC show, FOR LIFE, they will make my day.

Well if you call This network. and it will survive for 25 years. Really this program should’ve been canceled permanently

I’m encouraged. All Rise was the ONLy show I watched faithfully. So relieved that it will be back again. I still have the 2 seasons that were on. Timely, wouldn’t you say!! Hope it has most or all of the characters from back then!!

Hallelujah, I am happy about this news

Yes!!! WTO O this is still one of the best diverse shows on. Just because dick W didn’t write it does not make it any less. I’m fact better than two shows out now. Thanks Hulu.

Very good news that the show will be able to go on.

OWN doesn’t air on HellCable, but good to know that two of the “big” streamers will be carrying it.

Fantastic! My favorite show, so,so happy that OWN will produce season three. The writing is great, the acting is better, just WOW, great news!

Own crave & all the others are just a $$ racket.. prob owned by the cable companies!!

After watching it when I was on CBS for free why would I pay for it.