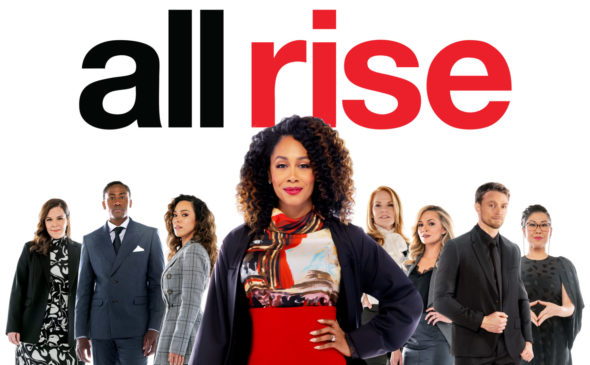 OWN is taking viewers back to court. The cable channel has announced the third season premiere of the All Rise TV series. The drama was cancelled after two seasons on CBS and was later revived and renewed by the OWN cable channel. Season three premieres on Tuesday, June 7th.

The All Rise TV show stars Simone Missick, Wilson Bethel, Jessica Camacho, J. Alex Brinson, Ruthie Ann Miles, Lindsay Mendez, Lindsey Gort, and Marg Helgenberger. The recurring cast includes Samantha Marie Ware, Paul McCrane, and Suzanne Cryer. The series follows the chaotic, hopeful (and sometimes absurd) world of those who work at a courthouse in Los Angeles. At the center of this drama series is Lola Carmichael (Missick), a judge who was previously a highly regarded and impressive deputy district attorney. She depends on the counsel of people like her Deputy District Attorney Mark Callan (Bethel), Supervisory Judge Lisa Benner (Helgenberger), and pragmatic judicial assistant Sherri Kansky (Miles). Lola pushes the boundaries and challenges the expectations of what a judge can be and receives both support and pushback from those around her.

Here’s more information from OWN, as well as a teaser video:

‘ALL RISE’: COURT IS BACK IN SESSION

Season Three to Premiere Tuesday, June 7, at 8 p.m. ET/PT on OWN

Los Angeles, CA – OWN: Oprah Winfrey Network announced today that the riveting courtroom drama series “All Rise,” starring Simone Missick, returns for a third season on Tuesday, June 7 at 8 p.m. ET/PT on OWN.

In anticipation for the return of the Warner Bros. Television-produced drama, OWN unveiled the season three key art, showing the ensemble cast back together in Courtroom 802.

The new season of “All Rise” picks up six months after the events of the sophomore finale and will bring about new beginnings for these judges, prosecutors and public defenders. We return on election night as Judge Lola Carmichael (Simone Missick) awaits the results of her campaign; Emily (Jessica Camacho) returns from Puerto Rico with renewed drive and purpose about her career and Luke (J. Alex Brinson) continues to shake things up through his work in the public defender’s office.

The first two seasons of “All Rise” are available to stream on HBO Max and Hulu.

About “All Rise” Season Three
All Rise” is a courthouse drama that follows the chaotic, hopeful, and sometimes absurd lives of its judges, prosecutors, and public defenders, as they work with bailiffs, clerks, and police to get justice for the people of Los Angeles amidst a flawed legal system. Among them is ‘Judge Lola Carmichael’ (Simone Missick), a highly regarded and impressive former deputy district attorney who has shown she doesn’t intend to sit back on the bench, but instead leans in, pushing the boundaries and challenging the expectations of what a judge can be.

A major theme in season three is new beginnings. After a year of COVID protocols, our characters who inhabit the Hall of Justice are ready to live. They are having fun finding themselves, fighting the good fight, shedding old habits and insecurities, and discovering the joy in their personal and professional lives as they seek out a new normal, new jobs, and new positions all while wrestling down old demons and discovering new love in old relationships.

About OWN: Oprah Winfrey Network
OWN: Oprah Winfrey Network is the first and only network named for, and inspired by, a single iconic leader. Oprah Winfrey’s heart and creative instincts inform the brand and the magnetism of the channel. OWN is a leading destination for premium scripted and unscripted programming from today’s most innovative storytellers. OWN connects with its audience wherever they are, inspiring conversation among a global community of like-minded viewers on social media and beyond. Launched on January 1, 2011, OWN is a joint venture between Harpo, Inc. and Warner Bros. Discovery. The venture also includes award-winning digital platformOprah.com. Access OWN anytime on http://WatchOWN.tv or across mobile devices and connected TVs.

What do you think? Are you looking forward to the return of the All Rise TV series on OWN? Are you hoping that this drama will be renewed for a fourth season and beyond?

Look forward to it.

Loved the show! Nice to see that it has another chance to shine!

This is wonderful news!!! So happy about ALL Rise returning for a 3rd season.. thank-you OWN tv. Now, can you PLEASE do the same with “For Life”… was such a great show & it is sitting on the shelf right now as ALL rise is! 🙂 Thanks again 🙂