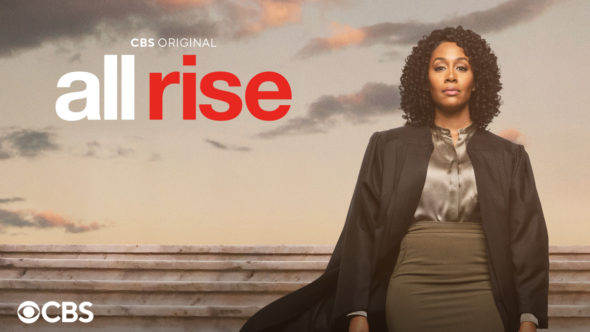 Last season, All Rise was one of CBS’ lowest-rated scripted series but it was renewed for a second year anyway. Will more viewers find the show this time around? Will All Rise be cancelled or renewed for season three? Stay tuned.  *Status Update Below.

All Rise stars Simone Missick, Wilson Bethel, Marg Helgenberger, Jessica Camacho, J. Alex Brinson, Lindsay Mendez, Ruthie Ann Miles, Lindsay Gort, and Audrey Corsa. The series follows the chaotic, hopeful (and sometimes absurd) world of those who work at a courthouse in Los Angeles. At the center of this drama series is Lola Carmichael (Missick), a recently appointed judge who was previously a highly regarded and impressive deputy district attorney. She depends on the counsel of people like her Deputy District Attorney Mark Callan (Bethel), Supervisory Judge Lisa Benner (Helgenberger), and pragmatic judicial assistant Sherri Kansky (Miles). Lola pushes the boundaries and challenges the expectations of what a judge can be and receives both support and pushback from those around her.

For comparisons: Season one of All Rise on CBS averaged a 0.62 rating in the 18-49 demographic and 5.43 million viewers.

What do you think? Do you like the All Rise TV series on CBS? Should it be cancelled or renewed for a third season?

One of my favorite shows. Please renew for third season.

I am really disappointed to hear that the show has been cancelled!!!! It was just a good show that I enjoyed watching and gave a insight into the workings of the court system.

How could you cancel such an intelligent show. The cast had such diversity was great reflection of what who works in our justice system and showed the inner workings of our justice system works. I am shocked you would cancel this show…..what a loss

Big mistake, why did you not see how good the show is with today’s way of seeing the justice system.