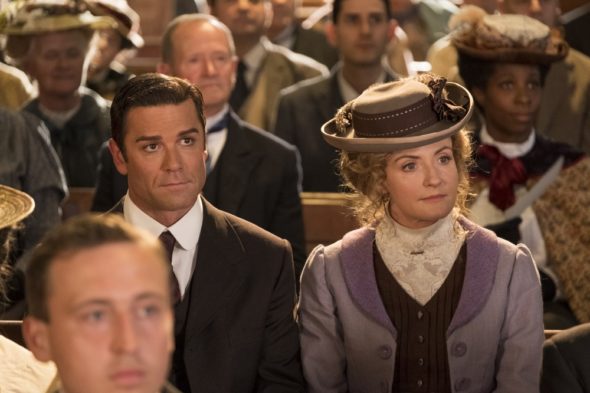 Do we need Detective Murdoch to solve this case? Is The Artful Detective TV show cancelled or renewed for a 12th season on Ovation? The television vulture is watching all the latest cancellation and renewal news, so this page is the place to track the status of The Artful Detective, season 12. Bookmark it, or subscribe for the latest updates. Remember, the television vulture is watching your shows. Are you?

Ovation ratings can be hard to get, and without them it is difficult to predict whether Ovation will cancel or renew The Artful Detective for season 12. Because this is a Canadian TV series though (it also streams on Acorn), my gut says that if CBC pickups the 12th season, Ovation will, too. For now, I’ll keep an eye on the trades and update this page with any breaking developments. Subscribe for free alerts on The Artful Detective cancellation and renewal news.

3/26/2018 update: The Artful Detective, which goes by the title Murdoch Mysteries in Canada, has been renewed for season 12 on CBC. Ovation will most likely follow suit. Sometimes, we don’t hear about the US renewals of Canadian TV series until they announce a premiere date, but I’ll update this page, when we know more. Details here.

What do you think? Should the The Artful Detective TV show be renewed for a 12th season? How would you feel if Ovation cancelled this TV series, instead?

Definitely renew! My friends and I love it!

Artful Detective is one of the best shows on TV. The story lines are amazing and the detail in each show is mind boggling
We have been following this show for years on Ovation TV
We’ve been waiting patiently for season 12

Please renew. We here in the colonies enjoy it immensely.

Please keep renewing the Murdoch Mysteries!! It is one of our favorite shows!!!

Please do not cancel Murdock’s Mystery or Artful Detective it is my favorite show!!!!

Best show. Can’t figure out why they wouldn’t renew it

Please renew The Artful Detective on Ovation for the 12th season…it is one of my favorite shows!!!

Please renew Artful Detective. I love that show. I have all of the DVDS of the show.

Love the Artful Detective. Definitely want season 12 to air on Ovation here in the US

I love this show. I hope to see season 12 real soon. I like the way they solve cases without modern science.

I just LOVE THE ARTFUL DETECTIVE AND MURDOCK MYSTERIES…………….every one of the characters……………..brilliant in their own right……….please start airing season 12……..waiting with baited breadth…………….