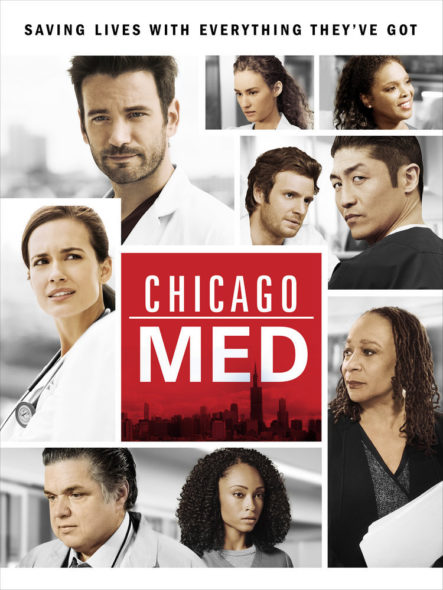 Is there a doctor in the house? Has the Chicago Med TV show been cancelled or renewed for a third season on NBC? The television vulture is watching for the latest cancellation and renewal news, so this page is a dedicated place to track the status of Chicago Med season three. Bookmark it, or subscribe for the latest updates. Remember, the television vulture is watching your shows. Are you?

Season two of Chicago Med averaged a 1.23 rating in the 18-49 demographic and 6.66 million total viewers. Compared to season one, that is a decrease of 28% in the demo and a decline of 16%, in terms of total audience size. Find out how Chicago Med stacks up against the other NBC scripted series.

While Chicago Med‘s second season ratings have dropped, that was to be expected. In its freshman year, the medical drama’s lead-in was NBC’s most popular series, The Voice, and now airs on a night with tougher competition and weaker lead-ins. The second season ratings have been relatively stable and the series is performing relatively well by current NBC standards. I expect the network will renew Chicago Med for season three.
5/10/17 update: NBC has renewed Chicago Med for a third season. Details here.

What do you think? Do you watch Chicago Med on NBC? Are you glad that NBC has renewed Chicago Med for season three? If the network had cancelled this TV show, would you miss it?

Love this show and characters. Love all the “Chicago” shows and would be terribly sad if this one is cancelled.

How come the male Doctors always need a shave?

Great show! Go for season 3! You have fantastic cast!

a great show great cast .I hope it gets renewed !!! Really interesting both character wise and medical !

Absolutely my favorite drama hands down! Please renew this one for sure!

Please renew for season three!!! We love this show !!! I don’t watch much tv due to all the garbage on. My daughter and I watch this and love it. Would really love to see a season three.

Please do not cancel Chicago Med. Its a very interesting and joyus show to watch

Please!! Season 3! Very good show! I’m a nurse! Not only is it good it’s very educational!

I love this show also. Why do you keep moving shows around. Everything is on Thursday nights. I have to tape all my shows in order to see them. Monday is awful Tuesday is good Wednesday and Thursday good. thank god for Hawaii five o and blue bloods Friday. Saturday , Sunday, Monday. nothing good on.
Please keep this show on.