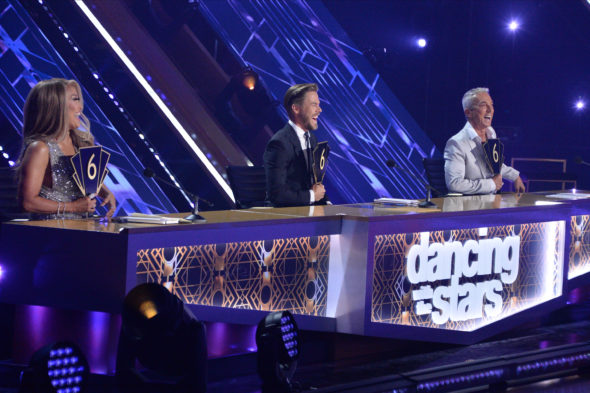 not impressed so far. The show has made it all about Tyra Banks and outfits and celebritie. The music and dancing is trying to hard to be another so you think you can dance wannabe. Im not enjoying it this year and may not finish watching this season. If they can’t make it more about the stars and dancers and less about Tyra plus make it a little more like dancing with the stars and not so you can think you can dance i wont be back.

Not thrilled with the change in host(s). I watched the first night. Totally unimpressed with Tyra’s ability to host smoothly. Just not her forte. I am done watching.

I have watched every season, every show until this season. Firing Tom was a bad decision. And, hiring Tyra to replace him is even worse

Was so excited DWTS was returning as I have followed since the first show, however I was very disappointed so far in Tyra Banks hosting. I believe she is out of her element hosting DWTS. She unfortunately comes across as a runway model on a stage and we have lost the interaction and fun side of previous hosts Tom and Erin. Tyra needs to change her actions, stance and her voice comes across as seductive and this is a family oriented show. my grandchildren watch this program and she’s supposed to be a host not a seductive model type. As… Read more »

I completely agree. Tyra Banks is not a good fit for DWTS. I thought it would just take some time getting used to a new host, but this is the third week and I find myself channel surfing when she comes on. She doesn’t “connect” with the stars or the judges. She seems to “talk down” to the stars. Makes me wonder if she had ever even watched the show prior to hosting. Looks like we are “stuck” with her for this season. My plan is to record the show and fast-forward through her part. Hopefully ABC will realize they’ve… Read more »

Tried to watch but had to change channels. New host Tyra needs to go now. Big mistake on ABC’s part. Tom and Erin are relatable to viewers and interject humor. Tyra is so full of herself. We’re done unless Tom and Erin return.

You ruined DWTS! I have been watching DWTS since day one. The dancers are all wonderful, classy, but the new changes, it is lacking the very reason so many of us enjoyed watching in the past. No more for us. Bring back Len, Tom and Erin.

I do not like Tyra Banks as host. She is terrible. They made a big mistake not keeping Tom and Erin. I thought the judges were good and I can understand Len not doing the commute during this pandemic. I will still watch but I would work in getting Tom back

It was a mistake getting rid of Tom. His humor and warmth very much helped carry the show. He seemed like and represented the head of the family. New host did not do a good job…no humor, no warmth…certainly not the right fit for the show. Why the change? Tom was a big part of the continuity of the show…you cut off the head. Unfortunately, the change you made will probably result in the demise of the show.

Watched for the first few minutes then turned it off. Ms. Banks is a dud. I will not watch anymore. ABC made a big mistake!!

They ruined a great show!
I didn’t realize how much Tom and Erin carried the show!!
Tyra Banks is in the wrong position on DWTS!!

Some things can’t be improved upon.
Sorry DWTS, I Won’t be tuning in again!

DWTS is but a shadow of its former self. Tom, Erin, and Len cannot be replaced. The celebrities are pretty obscure this season and new host Tyra Banks has no personality whatsoever. I will be sitting this dance out.

Why does Dancing With the Stars not include the people in California vote when the voting starts next week? The show is filmed in California isn’t it? Why should we watch when we don’t count? Maybe the votes from fans don’t actually count because the winner has already been chosen!

Disappointed in dancing with the stars. Big mistake bringing Ms Banks as host. Personally of a wet fish. I have watched this program from the beginning and the changes that were made are awful. Bring back Tom and Erin they have personality. Also get rid of the phony audience.

Tom was what kept the show entertaining and fun to watch. Erin as his sidekick was good also. I turned the show off after a few minutes and won’t be watching anymore. It’s being reported ratings were up for the premiere. That’s just because people wanted to check out Carole Baskin and Tyra as the new host. Ratings will start to drop as Tyra just doesn’t have what it takes to fill Tom and Erin’s shoes. The show has lost it’s charm and comedy relief.

I think cancel!!!! Tyra Banks is ridiculous . I will not be watching the show again . Nobody can replace Tom. Big ABC mistake. Tyra Banks is so boring and dressed so tacky and cheap!!!