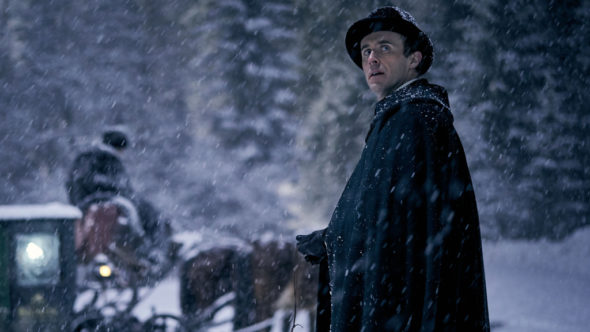 Is there more story to tell after the first season of the Dracula TV show on BBC One and Netflix? As we all know, the Nielsen ratings typically play a big role in determining whether a TV show like Dracula is cancelled or renewed for season two. Netflix and other streaming platforms, however, collect their own data. If you’ve been watching this TV series, we’d love to know how you feel about the first season episodes of Dracula here.

A BBC One and Netflix horror series, the Dracula TV show stars Claes Bang, Dolly Wells, John Heffernan, Morfydd Clark, Joanna Scanlan, Jonathan Aris, Sacha Dhawan, Clive Russell, Matthew Beard, Lydia West, and Mark Gatiss. Based on Bram Stoker’s classic novel, it follows the deadly Count Dracula (Bang), from his origins in Eastern Europe to his battles with Van Helsing’s descendant, Doctor Zoe Van Helsing (Wells), and beyond. The story begins in 1897 as English lawyer Jonathan Harker (Heffernan) travels to Transylvania to meet a new client — and a legend is about to get fresh blood.

What do you think? Which season one episodes of the Dracula TV series do you rate as wonderful, terrible, or somewhere between? Do you think that Dracula on Netflix and BBC One should be renewed for a second season? Don’t forget to vote, and share your thoughts, below.

This was a terrific show. I loved Dracula’s witty repartee. Please renew for a second season!

I really hope there is a season 2 of Dracula. Claes Bang was outstanding in the role – tall, dark, devilishly handsome, suave, witty and menacing (n0t to mention a bloody good actor) -what more can we ask for. It would be a waste of such talent if we do not see him back on our screens. BBC and Netflix please take note. Best thing I’ve watched on TV in a long time. Would also like to see Claes and Dolly in their own show together – that would be fun! MORE PLEASE

I think it’s convoluted and awful. Thumbs down to renewal.

I loved it, specially the convent scenes, unlike IR any other version of the story I have seen. The count is spectacular.