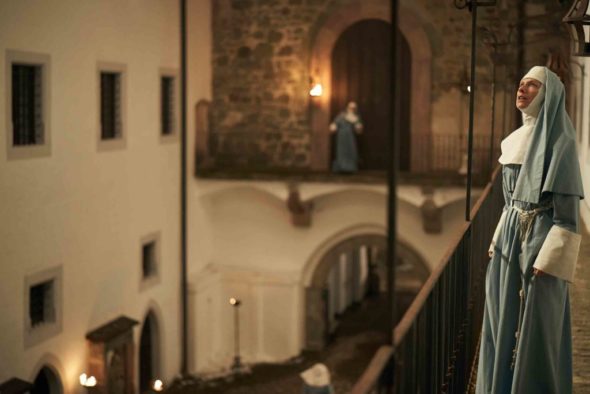 Is there still life left in this infamous bloodsucker? Has the Dracula TV show been cancelled or renewed for a second season on Netflix? The television vulture is watching all the latest cancellation and renewal news, so this page is the place to track the status of Dracula, season two. Bookmark it, or subscribe for the latest updates. Remember, the television vulture is watching your shows. Are you?

A co-production of BBC One and the Netflix subscription service, this horror TV series is based on Bram Stoker’s classic novel. The Dracula show stars Claes Bang, Dolly Wells, John Heffernan, Morfydd Clark, Joanna Scanlan, Jonathan Aris, Sacha Dhawan, Clive Russell, Matthew Beard, Lydia West, and Mark Gatiss. It follows the deadly Count Dracula (Bang), from his origins in Eastern Europe to his battles with Van Helsing’s descendant, Doctor Zoe Van Helsing (Wells), and beyond. The story begins in 1897 as English lawyer Jonathan Harker (Heffernan) travels to Transylvania to meet a new client — and a legend is about to get fresh blood.

Will Netflix and BBC One cancel or renew Dracula for season two? In press materials, Dracula has been referred to as a mini-series. Considering how the first season concluded, it would seem that there’s no need or room for a continuation. However, series creator Mark Gatiss has hinted that the infamous bloodsucker’s story could continue. How? The audience didn’t actually see certain characters die so, perhaps they survived somehow. A prequel series of some kind is also a possibility. While those options seem unlikely, there is room for some hope. Vampires are certainly no strangers to resurrection. I’ll keep my ears open and an eye out for news, and will update this page with breaking developments. Subscribe for free alerts on Dracula cancellation or renewal news.

What do you think? Do you hope the Dracula TV show will be renewed for a second season on Netflix and BBC One?

I loved this series! Its a shame but just when something gets good …cancelled!! Im sick of it! Please for the love of good tv don’t cancel this series !

Have episode 3 just be a dream. Dracula workers so much better in the past as opposed to the present.

Yes renew but keep Dracula in the past