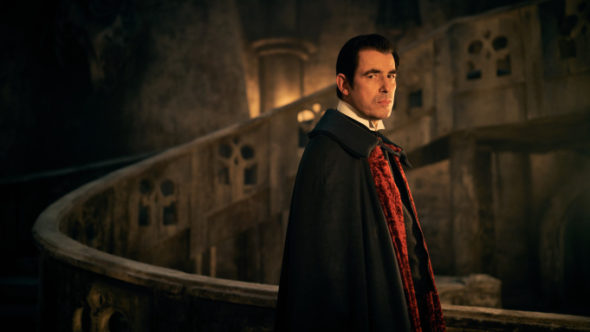 TV show description:
A horror TV series, the Dracula show is a new take on Bram Stoker’s classic horror novel. It follows the deadly Count Dracula (Bang), from his origins in Eastern Europe to his battles with Van Helsing’s descendant, Doctor Zoe Van Helsing (Wells), and beyond.

The story begins in 1897 as English lawyer Jonathan Harker (Heffernan) travels to Transylvania to meet a new client — and a legend is about to get fresh blood.

Series Finale:
Episode #3 — The Dark Compass
Lucy Westenra seems to have it all. A beautiful and popular girl with no shortage of young men in her thrall. Yet Lucy seems to have an emptiness inside her, a longing for something else. Something dark and… other. One might almost say, ‘be careful what you wish for.’ For out of the shadows steps another suitor – with a familiar face!England is an unfamiliar world pulsing with fresh blood and fresh possibilities. There are strange sights and sounds everywhere, and Dracula wastes no time in laying plans to spread his foul vampire contagion in this new larder. After landfall in Whitby, where else to head but the gleaming lights of London? But why does Dracula set his sights on the seemingly ordinary Lucy Westenra?

The legacy of Jonathan Harker’s stay in that far off Transylvanian castle comes back to haunt the Count as he finds himself unexpectedly checked by an alliance of formidable foes – one a steely scientist, another a callow young doctor in love with Lucy and determined to thwart the Prince of Darkness in his plans to dominate the world. As the adventure reaches its fevered climax, Dracula appears triumphant. Can anyone – living, dead or undead – stop him?
First aired: January 4, 2020.

What do you think? Do you like the Dracula TV show? Do you think it should be renewed for another season?