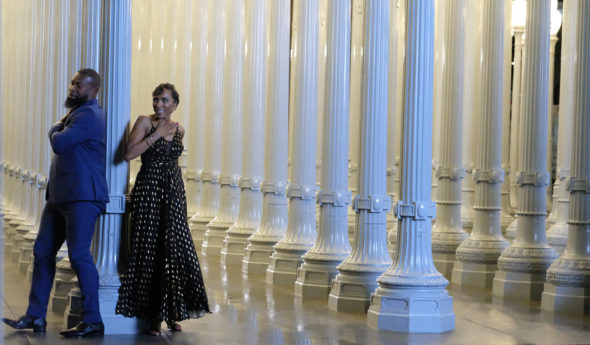 Does this show have two left feet when it comes to the ratings? Has the Flirty Dancing TV show been cancelled or renewed for a second season on FOX? The television vulture is watching all the latest cancellation and renewal news, so this page is the place to track the status of Flirty Dancing, season two. Bookmark it, or subscribe for the latest updates. Remember, the television vulture is watching your shows. Are you?

Airing on the FOX television network, Flirty Dancing is based on a United Kingdom reality series of the same name and is hosted by actress and dancer Jenna Dewan. In the show, complete strangers are each taught half of a dance routine. They then meet for the first time on a blind date at a breathtaking location, where they dance together without saying a word. Will there be an unspoken connection and chemistry? In this romantic approach to dating, the singles — who aren’t professional dancers — push themselves out of their comfort zones in the hope of being swept off their feet. Will it be love at first dance?

The first season of Flirty Dancing averages a 0.53 rating in the 18-49 demographic and 2.03 million viewers. Find out how Flirty Dancing stacks up against other FOX TV shows.

Will FOX cancel or renew Flirty Dancing for season two? The ratings are okay and this show seems inexpensive to produce so, for now, I think it will be renewed. I’ll update this page with breaking developments. Subscribe for free alerts on Flirty Dancing cancellation or renewal news.

What do you think? Do you hope the Flirty Dancing TV show will still be renewed for a second season? Do you think this FOX TV show will be officially cancelled?

A refreshing take for reality tv. Keep it on.

We really hope there r more episodes of flirty dancing
We love that program!!

I really enjoyed Flirty Dancing and hope it’s renewed. For one thing, my kids can watch it and it is fun to see the chemistry of the dance.

Wow, the show, I found to be simple but quite creative. I was involved with a concept similar to this about 40 years ago when I was in college. The act of meeting someone and not speaking and engaging in a dance is purely a different type of blind date that I can see being quite effective. After watching the first few episodes of the show it appears to me that the person seeking a matching date must have given, of course, the type of man or women that they were looking for and it seems as though at least… Read more »

My room mate and I love this show. When I asked friends about it they didn’t even know what I was talking about. It has not be advertised well enough. Please don’t cancel. I am not a bachelor watching person but I enjoy Flirty Dancing, I love watching the dancing and the people getting to know each other with out all the presence. LOVE LOVE the show. Do more episodes and with follow ups.

Love this show…please bring it back and do more
Advertising!

My Husband and I love this show due to the fact that we both love to dance..it’s a great alternative to people meeting on social media..So hope it’s renewed we’ll be heart broke if not!

I loved the show! It has a nice change of pace. I really hope it gets renewed. It has a mysterious flare to it!!

I really enjoyed the show, Flirty Dancing since my husband and I loved ballroom dancing. I hope it is continued for many seasons!

I love this show. Would love to be a contestant. Please bring back for a 2nd season, this gives some of us older singles a ray of hope that MAYBE 1 day we can find that special someone. I LOVE the fact of not speaking at first and see if the sparks fly!!

I am a very big fan of the dating show
I have a large group of friends that I go to start watching the show
I hope you have a season two
I even feel bold enough to apply to be on the show.
Please bring it back
Thank yyou

I loved flirty dancing!! Finally a great show and good for all to watch. It was a breath of fresh air to watch a wholesome tv show unlike most of the trash that has become the norm.
PLEASE bring it back. Good old fashion romance without the sex .

I absolutely love this show!!! It’s a great choice for family viewing and it’s a wonderful alternative choice to those ridiculous Bachelor shows!! It premiered during the Holiday Season which wasn’t a fair start! Please give this show a chance us romantics are in love with this show and there are plenty of us out there !! Also give it a good time slot for a better chance to be seen,enjoyed and to get the ratings they deserve!!! Thank you!!!