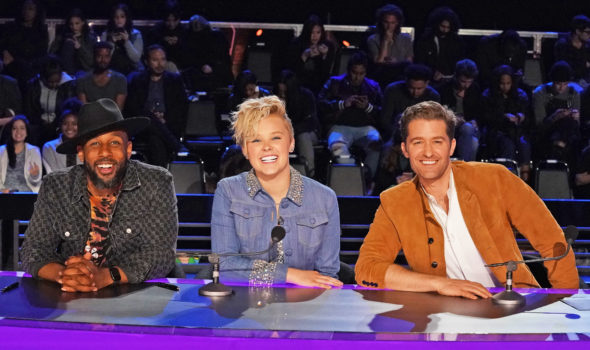 Will a new judging panel breathe new life into this venerable series? Has the So You Think You Can Dance TV show been cancelled or renewed for an 18th season on FOX? The television vulture is watching all the latest cancellation and renewal news, so this page is the place to track the status of So You Think You Can Dance, season 18. Bookmark it, or subscribe for the latest updates. Remember, the television vulture is watching your shows. Are you?

Airing on the FOX television network, the So You Think You Can Dance TV show is hosted by Cat Deeley. After a three-year absence, the show introduces a new judging panel with Stephen “tWitch” Boss, Matthew Morrison, and JoJo Siwa. The program features highly skilled dancers between the ages of 18 and 30, showcasing their talents in various dance styles, including contemporary, tap, hip-hop, ballroom, animation, breaking, and more. Those who are selected to move on to the SYTYCD studio work with world-renowned choreographers and compete each week in a variety of styles, with new twists and turns introduced into the competition.

The 17th season of So You Think You Can Dance averages a 0.30 rating in the 18-49 demographic and 1.60 million viewers. Compared to season 16 (which aired in 2019), that’s down by 37% in the demo and down by 22% in viewership in the live+same day ratings (including DVR playback through 3:00 AM). While these numbers don’t include further delayed or streaming viewing, they are a very good indicator of how a show is performing, especially when compared to others on the same channel. There can be other economic factors involved in a show’s fate, but typically the higher-rated series are renewed and the lower-rated ones are cancelled. Find out how So You Think You Can Dance stacks up against other FOX TV shows.

Will FOX cancel or renew So You Think You Can Dance for season 18? The show has been off the air for three years so a big drop in the traditional ratings is expected (more people begin streaming or watching delayed content each year) and it hadn’t been drawing big ratings prior to the pandemic-induced hiatus anyway. My sense is that FOX will keep it going, despite low ratings, but it wouldn’t be a surprise if they cancelled it either. I’ll update this page with breaking developments. Subscribe for free alerts on So You Think You Can Dance cancellation or renewal news.

So You Think You Can Dance Cancellation & Renewal Related Links

What do you think? Do you hope that the So You Think You Can Dance TV show will be renewed for an 18th season? How would you feel if FOX cancelled this TV series, instead?

Needs Nigel. Not a fan of JoJo – she’s so loud. Twitch is ok. Don’t even know who the other guy is. Too bad. They lost my neighbor and I.