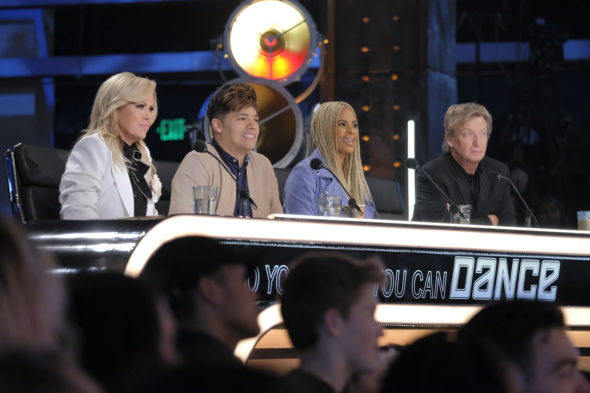 Will the band play on? Has the So You Think You Can Dance TV show been cancelled or renewed for a 17th season on FOX? The television vulture is watching for the latest cancellation and renewal news, so this page is the place to track the status of So You Think You Can Dance, season 17. Bookmark it, or subscribe for the latest updates. Remember, the television vulture is watching your shows. Are you?

A FOX dance competition reality TV series, hosted by Cat Deeley, So You Think You Can Dance pits dancers against one another, in a bid to become “America’s Favorite Dancer.” In season 16, returning judges Nigel Lythgoe and Mary Murphy are joined by Laurieann Gibson (Lady Gaga’s choreographer) and SYTYCD veteran Dominic “D-Trix” Sandoval. Together, the judges assess the dancers’ ability in various dance styles, including contemporary, tap, hip-hop, ballroom, animation, breaking, and more. The chosen dancers then work with choreographers and compete. Each week, contestants are eliminated until a winner is selected in the season finale.

Will FOX cancel or renew So You Think You Can Dance for season 17? The ratings continute to be quite low. This series has been a summer tradition for FOX for many years but it seems like the network has been waiting until the last minute to renew it each year. My suspicion is that, as soon as they find another series to replace it, they’ll be cancelling it or, at least giving SYTYCD a year off. That’s just my gut feeling though and, if this show’s ratings get better, I think Nigel and company will be safe. I’ll update this page with breaking developments. Subscribe for free So You Think You Can Dance  cancellation and renewal alerts.


So You Think You Can Dance Cancellation & Renewal Related Links

What do you think? Should the So You Think You Can Dance TV show be renewed for a 17th season? How would you feel if FOX cancelled this TV series, instead?

Please bring back So You Think You Can Dance! Our family LOVES how the show broadens the horizons of it’s contestants & promotes those who would not have a chance otherwise.