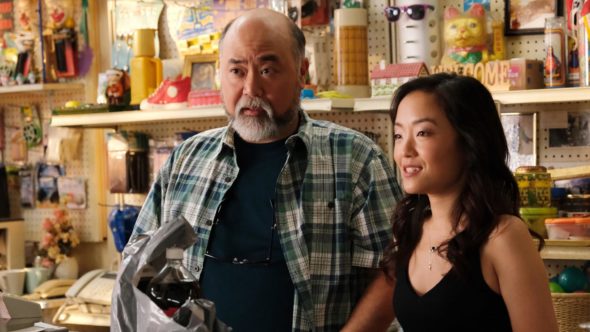 Kim’s Convenience is staying open for business. CBC just announced the TV show has been renewed for seasons five and six.

The comedy series, which streams on Netflix in the U.S., follows a Korean-Canadian family who run a convenience store in Toronto. The cast includes Paul Sun-Hyung Lee, Jean Yoon, and Andrea Bang.

CBC has not yet announced the premiere date season five of Kim’s Convenience, but season four just debuted on Netflix. Check out the renewal announcement below:

What do you think? Are you a fan of Kim’s Convenience? Are you glad it’s coming back?

Looking forward to the next 2 Seasons. My husband and I almost finished with watching Season 4 on Netflix.

So happy! Love this show

Heck yes! Thanks CBC for giving us this gem to enjoy! ❤️

Love this show! Please have many seasons its awesome,love all the characters

Love the show! Can’t wait for the next season!

I’m incredibly happy that Kim’s Convenience is renewed for two additional years. The show is hilarious and it’s nice to see shows featuring ethnic casts in a positive light.

I love this show. Love the humour, Toronto and the story lines. Stellar show. Love all the different characters. That Scottish Highland dance scene cracked me up. Hilarious.

I like the show a lot. Can’t wait to watch season 5 and 6. What is the date they will be on Netflix?

Yes my whole family loves it! Can watch it over and over!