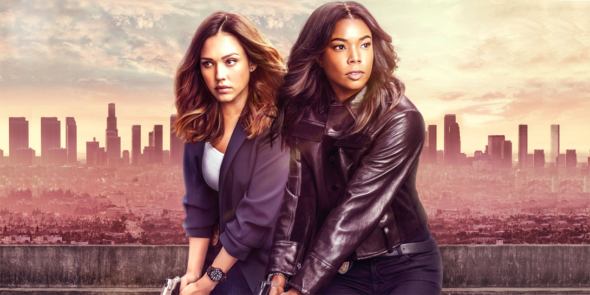 Once upon a time, Sydney Burnett (Union) took down a drug cartel in Miami. In an attempt to flee her complex past, these days Syd works as a detective for the LAPD.

Nancy McKenna (Alba), is Syd’s new partner, and her history is every bit as complicated. As a working mom, Nancy doesn’t have all that much in common with Syd, who may be hiding a deeply personal secret.

Although Syd and Nancy disagree more often than not, they share a willingness to go after LA’s worst criminals. Both women tend to think of rules more as guidelines — that is when they consider them at all. One thing is for sure, they will have a profound effect on each other’s lives.

What do you think? Do you like the LA’s Finest TV series? Should this Spectrum TV show have been cancelled or renewed for a third season?

Jessica A is good, but the other girl is so fake, where does she get all this money? LA cops don’t pay enough t o afford a Aston Martin (300,00o+)

PLEASE BRING IT BACK, PLEASE

Loved this series and can’t wait to see more!!!

Really like the show. Needs to be renewed for more seasons. Love Jessica Alba’s shows. I like the chemistry between her and gabrielle union. The characters are great.

This show needs to stay on

I love the show and Gabriel and Jessica are awesome

I really like it! It’s fun, dramatic, totally entertaining

Love this show, can’t wait for the second season

Love the show and the chemistry that all of the actors seem to have with each other. Hope
that the show stays around for a long time.

Please continue the la finest. I love watching it.