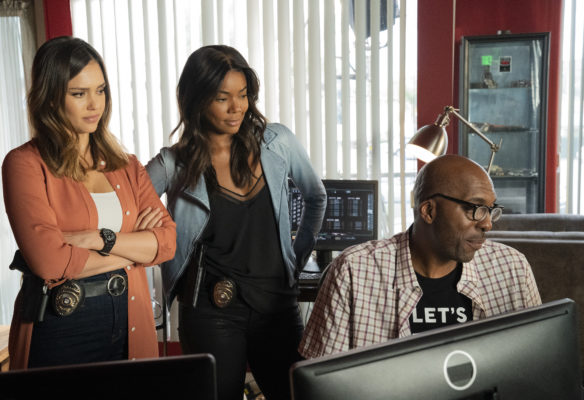 FOX licensed the first season of the LA’s Finest TV show to help fill out the network’s Fall 2020 schedule. The series has already been renewed by Spectrum for a second season and those episodes were already released on-demand by the cable provider. How will the LA’s Finest series perform in the broadcast ratings?  FOX has licensed season two but, will they air it once they can produce more original content? Stay tuned.

Originally airing as a Spectrum Original, LA’s Finest is a police procedural that stars Gabrielle Union, Jessica Alba, Ernie Hudson, Zach Gilford, Duane Martin, Ryan McPartlin, Zach McGowan, and Sophie Reynolds. Unfolding in the Bad Boys universe, the drama centers on Sydney Burnett (Union). Syd once took down a drug cartel in Miami, but has left the past behind and is now an LAPD detective. Her new partner is Nancy McKenna (Alba), a working mom who also has a complicated history. They may not agree on much, but together Syd and Nancy take on some of the most dangerous criminals in Los Angeles.

1/5 update: You can see the latest night’s ratings in context.

What do you think? Do you like the LA’s Finest TV series? Are you hoping that FOX will air the second season?

I loved this series. …every single episode. The dialog between Sydney and Nancy was fun and there was great chemistry in the buddy cop tradition.

Realtime Take watching 1st Episode…felt rushed. Not much established and treated viewers like “oh you didn’t know…”. I may keep watching for the tie in to Bad Boys, but seeing it is cancelled after two seasons…as I type (Jessica Alba just randomly bust in like “dayum…it’s a party up in here…” Ugh!!)…The Daughter is pretentiously privileged, the captain is trying to hard to be a presence…the Ben’s are lame… Rough first episode…this feels like I’m missing a season or an episode before this drama and the jokes aren’t hitting. They just walk up on a crime scene touching stuff…the use… Read more »

*Spectrum Started the 2nd ep and already this use of kids for sentiment missing twice already. Pretentious daughter (step daughter I guess) still a miss. Husband is Assistant District Attorney and is an idiot letting strangers in his home from off the street. White Dante (formerly lover?) just made a sudden insert into the show…I’m out. Shout out to John Salley reappearing, but this is weird. “I just got tagged on a viral video…OMG…Dad I think a girl just died…” Parents response…”Guys don’t watch that…and don’t tag anyone else…” now they are considered “tough” for their deadpan response to witnessing… Read more »

I’ve enjoyed this show, even though it’s an older show. Saw it was cancelled. Maybe it needs to be picked up for next summer by a big network.

Show is good! Enjoying the characters!

I think this is one of the best shows on FOX. I love it.

It was a good show when shown without commercials, but FOX cut it to pieces and put the commercials in the wrong places to show it on network TV. Anyway, I liked both seasons of the show, Spectrum cancelled it so there will be no season 3.

I clicked out of the show after about 10 minutes. Terrible. If this is L.A.’S Finest what is the worst. This show should not be renewed and for that matter should be canceled before the season is over. If you want to watch a good police show watch Chicago P.D.

This show sucks, lousy acting and writing. Without the T&A I would have no reason to waste any of my time. Now I’ve seen what they are going to show so I am gone.

I really liked the show! The actors had some great lines and they were able to keep the show going without loosing any momentum in between the scenes.

i found this show kind of boring, slow, and not so entertaining…i like the actors, but theres way to much filler with “personal issues” going on and not so much action, and the preview for the next episode looks like even MORE “back story” that clutters up the characters. i will watch 2-3 more episodes, but not looking forward to them.