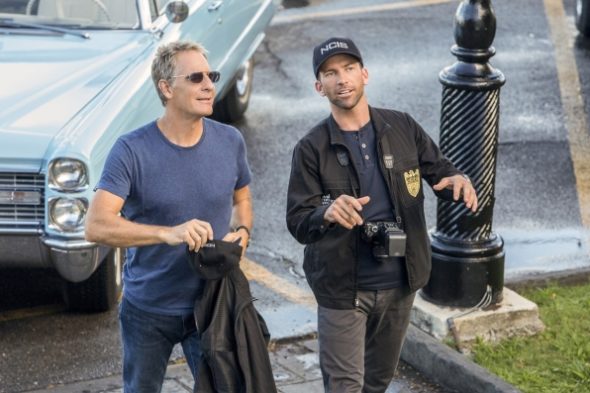 I am really glad it was renew. I love this show it’s one of our favorites. The cast most of them​ I really like. I don’t really care for gurgerio. I love everyone else. I really like Sabastian in the lab. He doesn’t fit in the field.( My opinion) Percy, Pride, lasell make the show for sure… I hope it makes another season.

Thank you CBS I love the show!! In fact all the NCIS shows.. Not really fond of the Grigiruo character but everyone else is great. I think New Orleans deserves to have its time slot back. BULL is a great show but maybe there is another slot for it.

I love ncis new orleans. Watch it every week. Will be glad when they end the issue with the mayor but otherwise excellent story lines.

NCIS New Orleans was a good show that has gotten progressively worse. The entire Percy Lasalle scenario is gag worthy. Sebastian in the field is a joke. What a bunch of klutzes ruining what was a fairly good show. Goodbye Percy and hopefully goodbye crap about the mayor. Boring.

I love NCIS New Orleans! The characters are interesting and likeable and Scott Bakula is the perfect lead. I’m happy to hear they’ll be back for another season.

I think it’s great to have a 4th season hope it continues for many more!

NCIS New Orleans is one of my favorite shows I am glad it was renewed.

Can’t wait for the new season. One of the few shows I watch on a regular basis. Take off Bull put it back in the time slot following NCIS.

Amen!! Put it back where it was. Get rid of BULL!!

Delighted that is has been renewed. It has a great cast and in some ways I like it better than the original NCIS show. Certainly hope it gets the ratings needed to keep the party going.

Yes we do enjoy the series keep it going

Luv the show but still think it sucks the way Zoe McLellan was dumped. That was a great potential to followup on the storyline after she ended up trusting the wrong guy instead of having her fall off the face of the earth. I especially wanted to find out who killed her sister. Even if her character still left she could have had a goodbye arc instead of a big hole where this great character had been. So thanks for ******** that for us viewers! I love the other characters and actors the way New Orleans is a character and… Read more »