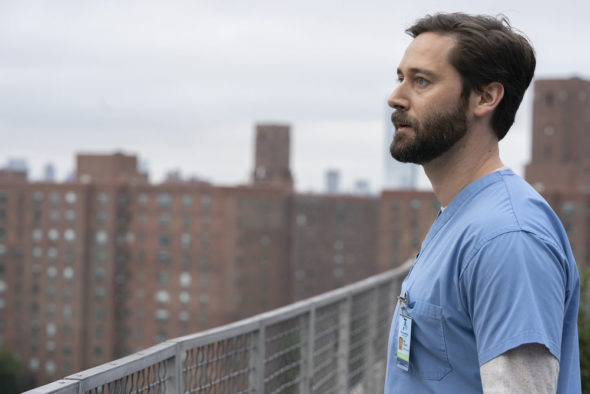 It’s nearly time to head back to New Amsterdam Medical Center. NBC has announced a kick-off date for the third season of the New Amsterdam drama series. The new episodes begin airing on Tuesday, March 2nd. The show has already been renewed through season five (2022-23).

A medical drama series, New Amsterdam stars Ryan Eggold, Freema Agyeman, Janet Montgomery, Jocko Sims, Anupam Kher, and Tyler Labine. Doctor Max Goodwin (Eggold) is a caring physician whose goal is to fix a broken medical system and to provide exceptional care to the people who need it most. He inspires (almost) everyone around him, and will stop at nothing to breathe new life into the understaffed, underfunded, and underappreciated New Amsterdam Medical Center. Those working with Goodwin include Dr. Lauren Bloom (Montgomery), the head of the ER; oncologist Dr. Helen Sharpe (Agyeman); cardiovascular surgeon Dr. Floyd Reynolds (Sims); psychiatrist Dr. Iggy Frome (Labine); and Dr. Vijay Kapoor (Kher), head of the Neurological Department.

· “New Amsterdam” averaged a 3.3 in the 18-49 demo and 13.8 million in total audience measurement and reached 45 million viewers over the course of its last season.

· When Dr. Max Goodwin (Ryan Eggold) took over New Amsterdam, he asked a simple, revolutionary question: “How can I help?” In season three, Max and his team face the daunting task of sustaining that optimism while dealing with a pandemic that exposed the gaping inequities in our health care. Max is no longer content to fix a broken system. He’s determined to tear it down and build something better.

What do you think? Do you link the New Amsterdam TV series? Will you be watching season three? Do you like knowing that the drama’s already been renewed for seasons four and five?

I used to love this show and looked forward to seeing it every week. The characters were engaging and the stories were interesting and written very well. What has happened to this series? Every single week it preaches to us about how one minority group or the other has been abused and treated badly. I have only watched one complete episode. If I wanted to be judged I would enter a contest and I go to church for any preaching I want to hear. An occasional message would be fine, but not every episode and not constantly the same blame… Read more »

I’m not usually a regular watcher of any tv series,but I’m totally into watch as many episodes as posible,the characters are so real and ingaging,I’m looking forward to see the character grow and see what’s next,it reminds me alot of e.r and that’s saying alot,hoping this series will be around for many years to come

We just Love ew Amsterdam. And we’re so glad to hear it will have five seasons!!! Here’s hoping there’s even more than that. A Wonderful show, compelling edge of the seat moments, and exhibiting in the story and in its characters caring, passions and compassion, contentions and compromises, and conflicts and resolutions. A great watch 2nd and 3rd time through!!! Thank you the makers all for raising our over all confidence in our medical professionals!! And Thanks to the professionals who live it, providing care for the ill!!!

I live in Spain and we watch this wonderful show on netflix over here. I am so excited that there will be three more seasons coming and hope that they will start soon on netflix as well. As a retired RN I love the inspiring characters and their attempts to change an archaic medical system to a healthier one. Good writing, good acting, inspiring content in general.

So glad it is coming back!

Can wait to see 3season
we love the series

Yes I will be watching the new hamsterdam TV series, and hopefully there will be season four and five.

I can hardly wait until new hamsterdam goes back on the air. I really miss watching it it’s a really good show to watch it’s interesting. Looking forward of watching it again thank you for bringing it back on the air for the third season

I’m excited to see it back on t.v. Thanks

I really enjoy the Series, I’m glad that it’s coming back on even though under the circumstances with the Pandemic.?