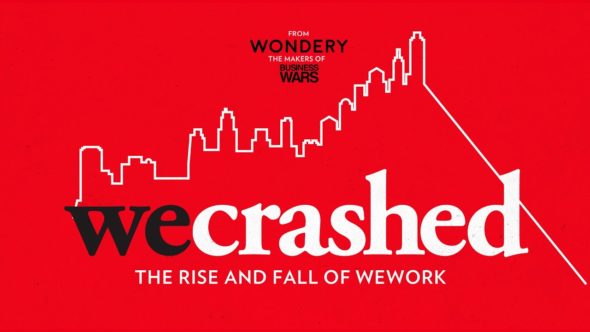 Apple TV+ has ordered another high-profile limited series. WeCrashed will star Anne Hathaway and Jared Leto and will follow “the greed-filled rise and inevitable fall of WeWork, one of the world’s most valuable startups, and the narcissists whose chaotic love made it all possible.” The scripted show is based on the WeCrashed: The Rise and Fall of WeWork podcast (art above). A premiere date or episode order has not been announced.

“WeCrashed” will follow the greed-filled rise and inevitable fall of WeWork, one of the world’s most valuable startups, and the narcissists whose chaotic love made it all possible.

As part of his overall deal with Apple TV+, Lee Eisenberg will co-write, executive produce and serve as showrunner of the series alongside Drew Crevello. Wondery will also executive produce.

Apple TV+ is home to award-winning Apple Originals from today’s most imaginative storytellers. Apple TV+ offers premium, compelling drama and comedy series, feature films, groundbreaking documentaries, and kids and family entertainment, and is available to watch across all your favorite screens. After its launch on November 1, 2019, Apple TV+ became the first all-original streaming service to launch around the world, and has premiered more original hits and received more award recognitions faster than any other streaming service. Apple Originals have been honored with 192 awards nominations and 56 wins in just over a year, including Critics Choice Awards, Critics Choice Documentary Awards, Daytime and Primetime Emmy Awards, an NAACP Image Award, a Peabody Award and more.

Apple TV+ is available on the Apple TV app in over 100 countries and regions, on over 1 billion screens, including iPhone, iPad, Apple TV, iPod touch, Mac, select Samsung, LG, Sony and VIZIO smart TVs, Amazon Fire TV and Roku devices, PlayStation and Xbox consoles, and at tv.apple.com, for $4.99 per month with a seven-day free trial. For a limited time, customers who purchase a new iPhone, iPad, Apple TV, Mac or iPod touch can enjoy one year of Apple TV+ for free. This special offer is good for three months after the first activation of the eligible device.1

What do you think? Are you an Apple TV+ subscriber? Do you plan to check out this new series?