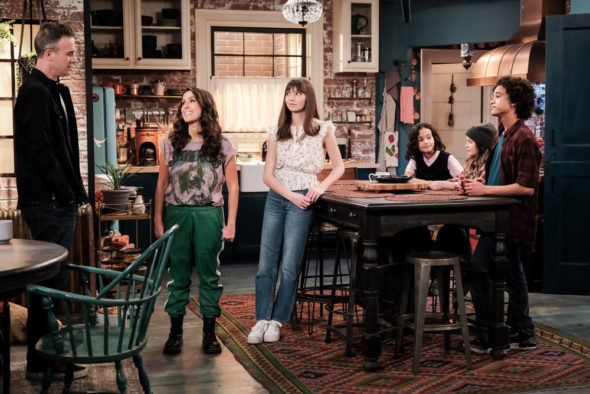 Punky Brewster is not returning to Peacock for a second season. The streaming service has cancelled the series which is a sequel to the popular 1980s sitcom. Former child star Soleil Moon Frye returned to continue Punky’s story as a single mom who finds a girl much like herself.

Lisa Katz, President, Scripted, NBCUniversal Television and Streaming, said the following about the cancellation, per Deadline:

“Punky Brewster was a beloved series that tackled meaningful storylines with so much heart. It was a bright light for so many viewers and we are forever grateful to Universal Studio Group, the producers, the cast and crew and especially to Soleil Moon Frye for reigniting the Punky Power within everyone.”

What do you think? Did you watch the Punky Brewster sequel on Peacock? Did you want to see a second season?

That’s BS! It was a really good series spin off and deserves a season 2. How the hell does Fuller house get 4 seasons and this one was cut off after 1. I was bored with fuller house halfway thru season 1. With punky i am gripped and now they just pull the rug out? There is a reason my password includes I hate Peacock. Not just because the app randomly crashes all the time.

I loved watching the show with my kids. It brought my family together like it was at my home growing up with my parents. It was great watching the values of older tv shows. It was good to see a glimpse of my past while spending quality time with my family. I would have loved to see another season but it is what it is.

What a shame that it wasn’t renewed for a second season. It was well done, well cast and had a very interesting storyline that should have continued. Bad move to cancel such a well received show.

Whyyy, I am devastated….

When I heard that a new Punky Brewster was coming out and that our beloved Soli Moon Frie was once again gracing the screen as Punky. I watched the original with my oldest daughter in the 80s and was so looking forward to sharing the new Punky with my youngest. It saddens me that there will be no season 2. In our society today we need clean holesome comedy. It is my hope that some station picks up where peacock left off all to soon.

I really enjoyed the show. Was so looking forward to seeing season 2 . It is a nice family show that shouldn’t be cancelled. Please bring it back

As far as “reboot” series go, at least this one stayed true to its original characters and as close as they could to the original premise of the show.

Beats the unholy Hell out of that rancid mess they pass off as “Dynasty” on CW, for example. Joan Collins is rolling over in her grave at that dragonshit… and I’m not even sure if she’s dead!

(Yeah, you would think I would know, since she damn sure wouldn’t be going upstairs. But I haven’t seen her around down here.)

I really enjoyed it! It’s such a good-hearted show, and definitely needed in today’s world. I’m sure something awful about murder and death will be renewed. Speaks volumes about the state of the world.

Oh No!! I really enjoyed this Sequel to the Original Punky Brewster. I love how they brought in a new little girl who reminds me so much of Punky when she was young. Grown up, she is a very kind, mature, loving, and fun adult. I would love to see her reunite with her ex husband on the show. I have written to Netflix to see if they will bring this show back with a new season. I hope more people also request this show on Netflix.

I loved the show.It’s unfair.

Why did they cancel this show it is such a going show with moral and values. It’s a shame, truly was is a shame. I actually really liked this reboot.

All the remake crap it cancelled? Future people stop watching tv then will networks notice they not in the best thoughts what people want to watch

This really sucks I was really enjoying this show. I wish it would be given more time. Sucks

Oh, no! I feel bad for all the “Punky Brewster” fans out there! Boo-hoo!