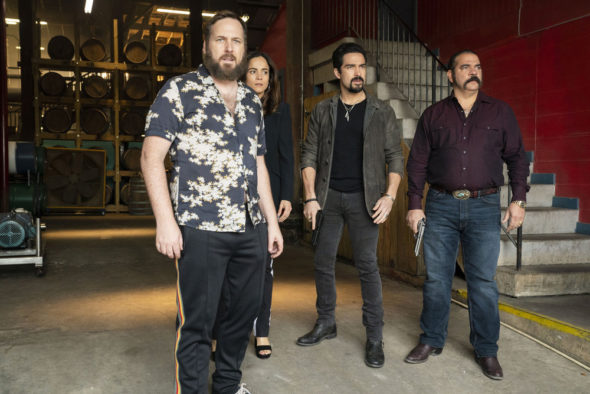 What is in store for Teresa Mendoza? Has the Queen of the South TV show been cancelled or renewed for a fifth season on USA Network? The television vulture is watching all the latest cancellation and renewal news, so this page is the place to track the status of Queen of the South, season five. Bookmark it, or subscribe for the latest updates. Remember, the television vulture is watching your shows. Are you?

A USA Network drama based on the Spanish-language telenovela and novel La Reina Del Sur, by Arturo Pérez-Reverte, Queen of the South stars Alice Braga as Teresa Mendoza, a woman on the run from a powerful drug cartel, who seeks refuge in the U.S. The cast also includes Veronica Falcón, Hemky Madera, Peter Gadiot, Jon-Michael Ecker, Idalia Valles, and Nick Sagar. Chris Greene and Sofia Lama recur in season four, when Teresa expands to New Orleans.

The fourth season of Queen of the South averaged a 0.29 rating in the 18-49 demographic and 920,000 viewers. Compared to season three, that’s down by 22% and 19%, respectively. Check out how Queen of the South stacks up against other USA Network TV shows.

Will USA Network cancel or renew Queen of the South for season five? The live ratings are down but the series is still one of the channel’s highest-rated series so I think it will be renewed. I’ll update this page throughout the season. Subscribe for free Queen of the South cancellation or renewal news.

Update: USA Network has renewed the Queen of the South TV show for a fifth and final season.

What do you think? Are you glad that the Queen of the South TV show was renewed for season five? Are you sorry that there won’t be a sixth season?

SEASON 5 OR BUST!!! Everybody loves the QUEEN and the cast! One of the best out there!

Sooooo totally agree!!! Props to the writers and especially casting directors! They couldn’t have picked a better crew to play these characters!

Please bring back season 5, we have a group at my house every Thursday nite to watch!!!we are all over 49!!!

Yes yes yes. I definitely want Queen of the South to come back season 5. I’m not one for watching series weekly but this one has really caught my attention and I look forward to every Thursday to be able to watch it. I bought series 1 2 3 and now in the middle of purchasing four… This way I can re-watch episodes whenever I want. Please bring back Queen of the South season 5. I miss Camilla. Where is she?

Love this show. Would love to see James come back and Camilla. One of the best shows I have watched. Please bring back Season 5

The best series ever watched. Please come back with season 5 and more.

I really hope they renew for season 5

Bring it back I’m to far in it

This def needs to be extended. No other way to think about it with James and a baby James

Pretty positive it will NOT be renewed as the wardrobe is now being auctioned off through VIP auctions as I just purchased some of it. VIP ONLY DOES THE AUCTIONS AFTER CANCELLATION. Sorry for the cap lock
Steve

NOOOOOO!!! RENEW IT FOR SEASON 5 & beyond! What stupid show could possibly replace this action packed show???

Love the show. Hope it continues for Season 5.