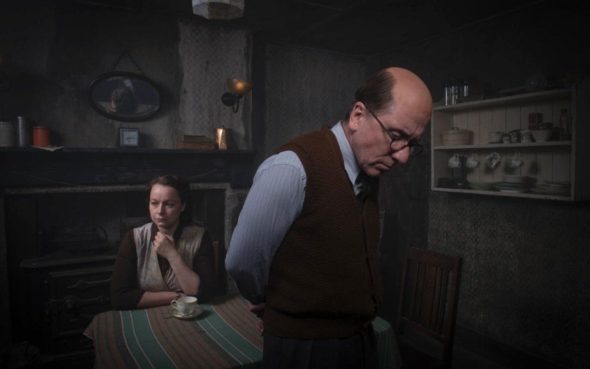 Rillington Place is coming from the UK to Sundance Now next week! The thriller mini-series will air starting October 5.

Sundance Now revealed more about the arrival of the series in a press release. Check that out below.

“Sundance Now, AMC Networks’ premium video streaming service, will debut RILLINGTON PLACE, the critically acclaimed mini-series starring Tim Roth (Tin Star, Twin Peaks, The Hateful Eight, Rob Roy) and Samantha Morton(Fantastic Beasts and Where to Find Them, In America) exclusively in the U.S. Thursday, October 5th, on Sundance Now. The chilling three-part scripted drama, is based on the real-life multiple murders carried out by John Christie (Roth) in Notting Hill in the 1940’s and 50’s.

Presenting each episode from separate viewpoints of Ethel, Timothy and Christie, the mini-series highlights the subsequent tragic miscarriage of justice, which led to Timothy Evans being hanged for a crime he did not commit, contributed towards the abolition of capital punishment in Britain.

Reconciled after living apart for nine years, John Reginald Christie (Roth) and his wife, Ethel (Morton), move into the ground floor flat of 10 Rillington Place, West London. The adjustment to a new life, in a small, rundown property, is particularly felt by Ethel but she strives to please her husband. Ten years on, Timothy Evans and his wife Beryl move into a flat upstairs and fall prey to Christie’s influence and tales. When Beryl becomes pregnant with a second child, already struggling to make ends meet following the birth of baby Geraldine, the Evans allow Christie to help them with deadly consequences for the young newlyweds.

Rillington Place is made by BBC Studios, the BBC’s commercial production arm, in association with Bandit Television for BBC One. It is directed by Craig Viveiros (And Then There Were None) and written by Ed Whitmore (He Kills Coppers) and Tracey Malone (Born To Kill). Distribution is handled by BBC Worldwide.  The deal was negotiated by Aurelie de Troyer, VP of Global Acquisitions and Co-Productions for Sundance Now.”

Will you check out Rillington Place? Tell us what you think.