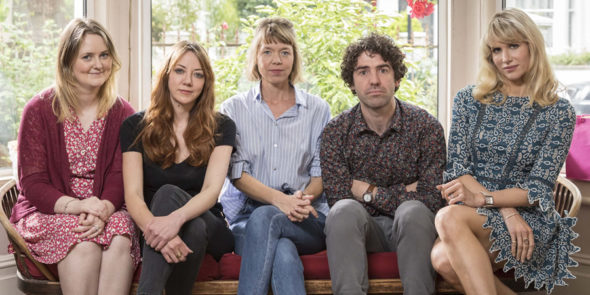 The scripted comedy follows “Julia (Anna Maxwell Martin), who always wanted her kids to be brought up like she was — by her mother. But instead her mom has abandoned her, so now she is thrown head first into the Motherland where it’s sink or swim.” The cast also includes Lucy Punch, Diane Morgan, and Paul Ready.

Motherland premieres on Sundance Now on May 10th.

New York, NY – April 19, 2018 – Sundance Now, AMC Networks’ premium video streaming service, announced today the acquisition of BAFTA-nominated hit British television series “Motherland” from global content leader Lionsgate (NYSE: LGF.A, LGF.B), which has worldwide rights to the comedy. The critically-acclaimed series, written and created by Sharon Horgan, Holly Walsh, and Graham and Helen Linehan, will make its exclusive U.S. debut with the first two episodes premiering on the service Thursday, May 10th. New episodes of the half-hour comedy starring BAFTA-winner Anna Maxwell Martin (Philomena, The Night Watch), Lucy Punch (“A Series of Unfortunate Events”, Into the Woods, “Ben and Kate”), BAFTA-nominated Diane Morgan (“Cunk on Britain”, Me Before You, Funny Cow) and Paul Ready (The Death of Stalin, “The Terror”) will stream weekly every Thursday until its season one conclusion on June 14th.

“We are thrilled to partner with Lionsgate to premiere ‘Motherland,’ a hilariously honest and relatable portrayal of the hyper-competitive world of modern parenting, exclusively on Sundance Now following its successful first season on the BBC,” commented Jan Diedrichsen, General Manager of SundanceTV and Sundance Now. “The series is sharply written and features a great ensemble cast.”

“‘Motherland’ has been a great success for the BBC, and we’re delighted to have found a U.S. home for it on Sundance Now,” said Lionsgate President of Worldwide Television and Digital Distribution Jim Packer. “It’s a great addition to their deep roster of programming, and its wit, humor, and authenticity will resonate with all audiences.”

The series follows Julia (Anna Maxwell Martin), who always wanted her kids to be brought up like she was — by her mother. But instead her mom has abandoned her, so now she is thrown head first into the Motherland where it’s sink or swim. While she struggles with work and life she meets a full array of hands-on parents including the ‘Alpha Moms’ headed by Amanda (Lucy Punch), who is the Queen Bee: everything is organized, vacuum-packed and sterile — even the kitchen chalk board is a statement of success. At the other end of the spectrum is single mom Liz (Diane Morgan), who is low energy but full of life hacks. She has learned to do things her way. Then there’s Kevin (Paul Ready). He’s the stay-at-home Dad who embraces the Motherland with gusto — much to the irritation of the other mothers.

What do you think? Are you a fan of British comedies? Will you watch Motherland?

Change the graphic because it’s from a different BBC show.