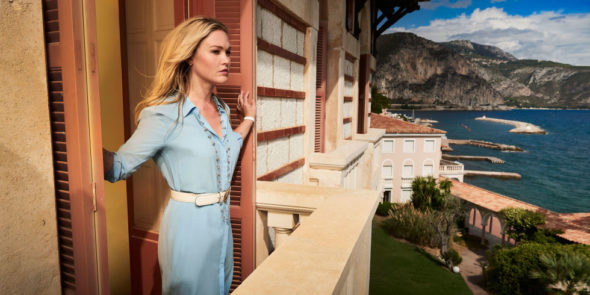 Sundance Now is headed back overseas. Recently, the streaming service announced season two of Riviera will premiere in 2019.

Season two of Riviera is currently in production and slated to debut on Sundance Now in 2019.

While the Clios family contend with the devastation caused by Constantine’s death, Georgina’s focus is on getting away with murder. However, things become more complicated with the introduction of the Elthams, an aristocratic English family with secrets of their own. Juliet Stevenson takes on the role of Lady Cassandra Eltham and is joined on the Riviera by her children, the brooding Nico (Fox), the impossibly stylish Daphne (Delevingne) and Daphne’s husband Raafi Al Qadr (Lanipekun) who hails from Qatari wealth.

Meanwhile, Georgina (Julia Stiles) is reunited with her charismatic uncle Jeff (Arnett) and we learn more about the troubled past she left behind in America. She also becomes entangled with the handsome and mysterious Noah (Fitoussi).

“‘We are delighted to welcome a second season of ‘Riviera’ to Sundance Now. It is an addictive series with a compelling narrative, a gorgeous setting, and an all-star cast – it’s no wonder that season one resonated with our members in such a powerful way,” said Jan Diedrichsen, General Manager of SundanceTV and Sundance Now.

Julia Stiles said, “It’s thrilling to return to the Riviera and to welcome such incredible new talent to the show. Georgina’s past catches up to her in season two and the drama only intensifies. She is reunited with her mysterious yet charming uncle, someone who sees through her armor. Will is perfectly cast in that role and I am excited to explore how far Georgina will go to protect her new life.”

“Riviera” also welcomes back acclaimed Belgian director, Hans Herbots (Rellik) in the role of lead director. Sue Howells is on board as Series Producer for Season 2.

“Riviera” is a Sky original production in association with Altice Studios. Produced by Archery Pictures, Primo Productions and Sky, the executive producers are Kris Thykier, Paul McGuinness and Cameron Roach for Sky. International distribution is being handled by Sky Vision.

What do you think? Have you seen Riviera? Will you watch season two?

I absolutely love this series! Please show the other seasons!

Omg…Love RIVIERA! Purchased Sundance Now…just for Season 2! But I have to say, there are many great shows on it as well.

Totally LOVE this show and hope it goes on for many seasons! The cast is fantastic, every single one! I do wish Iwan was still in the series!

I love Riviera. The only minor issue is Julia Styles dirty hair. She is beautiful but always looks so unkempt with her straggly, dirty hair.

I am usually on the edge of my seat. Excellent story.

I kept hoping for Anthony LaPaglia to return. It doesn’t look like he’s going to so I may forego Season 2. I love Julia Stiles but am annoyed by subtitles (often multi-tasking) and miss Constantine as a foil. Half the reason I watched was LaPaglia.

I enjoyed the first season thoroughly and can’t wait for the second.

This promised much but in the end it wasn’t very good at all. I’m surprised it got a 2nd series. Maybe the exotic location and actors in it proved too much for the studio not to try a 2nd.

It promised a lot but had a one dimensional feeling that left it rather flat.