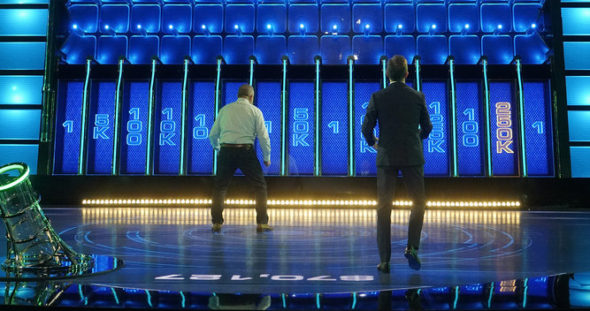 Has this show’s long absence hurt its chances?  Has The Wall TV show been cancelled or renewed for a fourth season on NBC? The television vulture is watching all the latest cancellation and renewal news, so this page is the place to track the status of The Wall, season four. Bookmark it, or subscribe for the latest updates. Remember, the television vulture is watching your shows. Are you?

Find out how The Wall stacks up against other NBC TV shows.

Will NBC cancel or renew The Wall for season four? The series has done pretty well for the network in the past as a utility player, filling in gaps in the schedule as needed. However, the show’s been off the air for over two years and it seems that some viewers have forgotten about it. If you look at the ratings, the audience has really dropped off. As a result, I’m thinking that The Wall will be cancelled. (Since 20 episodes have been produced, it seems possible that NBC will, once again, split the season into two parts and save some episodes for the 2020-21 season.) I’ll update this page with breaking developments. Subscribe for free alerts on The Wall cancellation or renewal news.

What do you think? Are you glad that The Wall TV show has been renewed for a fourth season? How would you feel if NBC had cancelled this TV series, instead?

The Wall is a GREAT, GREAT show. I look forward to watching every episode. How can you not be excited for deserving people to not win large amounts of money? Please, please renew this show.

I will be very disappointed it the Wall is not renewed and we will get season 4. I have enjoyed season 3 and watched every episode. I have a few friends that feel the same.

I love the game show. Wall hope it gets to stay on. My son and I watch it. We sit and try to answer the questions. Then I get so excited when the ball drops. Root for it to hit a high amount. Please bring it back.

I LOVE THE WALL. I watch it with my husband. We try to answer all the questions and root for the contestants when the ball drops. It is a really exciting game. PLEASE!!! Let there be a season 4!!!

Yes it should come back for another season! Good people doing good things in life with a chance to get a financial windfall!

Please renew this show for AT LEAST another season and do better advertising so the ratings go up. It is one of the most exciting shows on TV now and the contestants are all very likable and fun to watch. I am a senior and this is one of my favorite shows

Please keep this show on the air. I really enjoy it and I know some seniors that do. It is exciting to see people who really deserve it to see how much money they can make. I am a senior and there is not much on TV these days that I care to watch but I enjoy the wall. Please again….. leave it on the air. Thank you

I loved the show can’t wait to see another

I LOVE the wall please don’t cancel it. Besides LeBron James is doing a good thing for people who deserve it. How many other game shows do that? ZERO.

I agree please keep the wall! I look forward to watching every week!