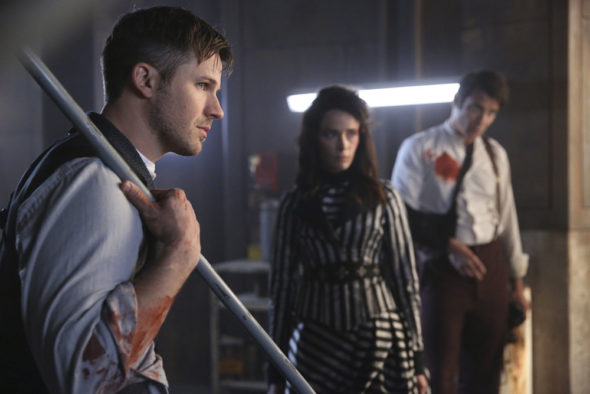 Although the clock is ticking, NBC still has not announced whether Eric Kripke and Shawn Ryan’s Timeless is cancelled or renewed for season three. The Timeless fanbase, which often self-identifies online as #Clockblockers, has been campaigning hard for a season three renewal, despite the TV show’s low ratings in the second season. That season only happened thanks to the fans. When NBC cancelled Timeless, after its freshman outing, there was such an outcry that the network then reversed itself and renewed the series.

Today, knowing the fans feel as bloodied and battered as Wyatt (Matt Lanter), Lucy (Abigail Spencer), and Flynn (Goran Višnjić) look in the above photo, the writers acknowledged the long wait on their official Twitter account. They also made sure to thank fans for their hard push for a third season pick up. Check out their messages, below.

An NBC time-travel drama, Timeless also stars Malcolm Barrett, Paterson Joseph, Sakina Jaffrey, and Claudia Doumit. As the Time Team, their mission is to prevent the destruction of our world as we know it. Susanna Thompson, Annie Wersching, and Michael Rady recur in season two as members of the nemesis organization, Rittenhouse.

Timeless Writers Address the Wait for Cancellation or Renewal News


UPDATE: We know it's frustrating to our fans to not have an answer yet re: #RenewTimeless. We've been led to believe a couple times that an answer was imminent only to have answer pushed. Unsure if that's good/bad. Just know we're fighting hard for #Timeless.


One other comment: Your voices and tweets in such big numbers and with such vociferous support are truly impactful. They hear your roar. #RenewTimeless #ClockBlockers https://t.co/oIHSnxmIC0

What do you think? Are you getting anxious about the cancellation/renewal chances for a third season of the Timeless TV series? Sound off, in the comments.

NBC please renew TIMELESS, it has action, history, humor and can be watched with the family. You need to take into consideration other age groups and the people who dvr or record shows to watch later. Who are these fictional neilson families? Have met a lot of people across the us in years past and never met one.

Please don’t give up on Timeless even if NBC says no!! Perhaps executives at another network would be smart enough to pick it up, give it a better time slot and MORE than 10 episodes!! We simply have to see how the future Lucy & Wyatt get Rufus!!!!!!!we have to see more of Lucy & Wyatt’s romance unfold as well as a Jiya & Rufus reunion ❣️SAVE TIMELESS!!!!

A please keep Timeless on air. It is giving me a renewed interest in history. I have listened to two books on tape about the Revolutionary War I have one on hold at the library and I have a list of historical books on tape to listen to. It is a great show and it inspires people to want to know more about history. My 14 year old son watches it with me and he started looking things up and finding things out about the different episodes. please renewed timeless!!!

Please renew Timeless…so few good shows left on tv…what a finale…it can only get better!!

One if my favorite shows. So sick if reality TV! I love the humor and the historical nature of Timeless.

Please please #RenewTimeless! My hubby and I love to watch this together after we got all the kiddies to bed.

I am a big fan of Timeless. Add me to the list of those strongly hoping for a 3rd season.

This is my favorite show that I look foward to watching every week. We need to see a third season so we canfind out just how far the rabbit hole goes. #RenewTimeless

I LOVE this show. Please renew Timeless. Looking forward to another season….with more episodes!! Please and thank you!!

So many intelligent, creative shows have been cancelled in the past couple of years. Please #RenewTimeless!!!