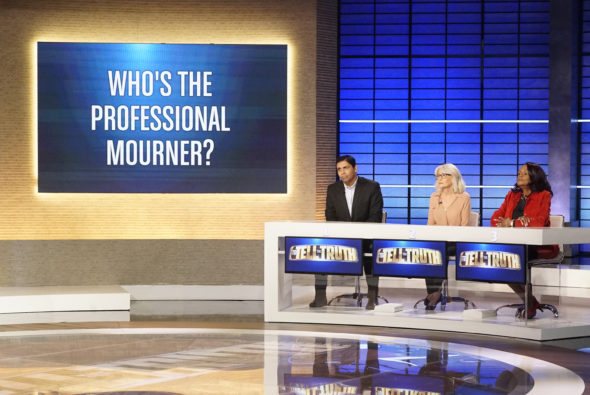 What’s the real deal? Has the To Tell the Truth TV show been cancelled or renewed for a fifth season on ABC? The television vulture is watching all the latest cancellation and renewal news, so this page is the place to track the status of To Tell the Truth, season five. Bookmark it, or subscribe for the latest updates. Remember, the television vulture is watching your shows. Are you?

An ABC game show, hosted by Anthony Anderson, To Tell the Truth features a panel of four celebrities who are presented with three people who all claim to be the same person with the same incredible talent, job, or achievement. One is sworn to tell the truth, while the others are not. Panelists this season include Oliver Hudson, Justin Long, Snoop Dogg, Amanda Seales, Anna Camp, Joel McHale, Ron Funches, Kirstie Alley, Angela Kinsey, Alyssa Edwards, Fortune Feimster, and Adam Rodriguez. Anderson’s mother, Doris, returns with commentary, too.

The fourth season of To Tell the Truth averaged a 0.59 rating in the 18-49 demographic and 3.53 million viewers. Compared to season three, that’s down by 22% in the demo and down by 9% in viewership. Find out how To Tell the Truth stacks up against other ABC TV shows.

Will ABC cancel or renew To Tell the Truth for season five? This and ABC’s other game show revivals have done pretty well for the network so, right now, I think this series will be renewed. I’ll update this page with breaking developments. Subscribe for free alerts on To Tell the Truth cancellation or renewal news.

What do you think? Are you glad that the To Tell the Truth TV show has been renewed for season five? How would you feel if ABC had cancelled this TV series, instead?

I love To Tell the Truth. Please don’t cancel it. Anthony is terrific and the show is just fun!!

I am very pleased and happy that season five was renewed I enjoy watching to tell the truth it’s very educational and funny.Where and how can you audition to be an imposter for the show?

I love to tell the truth love Anthony Anderson

Yes like the show. first time watching the show so funny and educational, and Anthony’s mom is great, I love it because she’s so her self.
Keep the show , we need more funny, to much sadness in the world.

I DVR’d the show and just watched it. Kept laughing. Looking forward to next episode.

As far as game shows go, I always like To Tell The Truth, but I’m NOT pleased that Anthony Anderson’s mother is always on that show. The older format was much better. Anderson’s mother Doris is sarcastic and doesn’t lend any enjoyment to the show. I quit watching it because of her rudeness.

I must tell the truth. I want a season 5 . Please.

Renew, please. It’s one of the rare shows you can view with all ages.

I enjoyed the show To Tell The Truth and think you should not cancel it. It was fun.

Please renew to tell the truth it is the best best

Please renew to tell the truth it is the best best game show on TV. Thank you so much

We have Spectrum for cable.Please get them to renew. This show’ to tell the truth is so entertaining and informing and so funny. Done very well.

Love this show.It’s so funny. Love guessing who it is. I watch it over and over. It is refreshing and entertaining. Please renew.
.