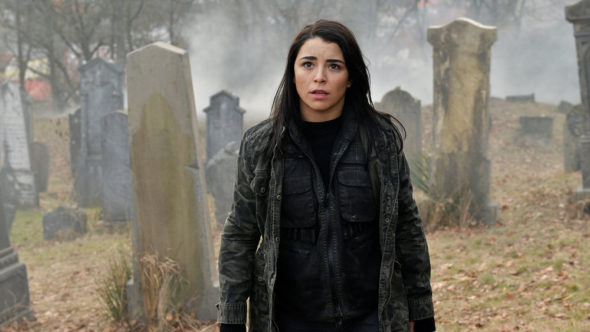 Will the Dark One be victorious in the fifth season of the Van Helsing TV show on Syfy? As we all know, the Nielsen ratings typically play a big role in determining whether a TV show like Van Helsing is cancelled or renewed for season six (in this case, we know season five is the end). Unfortunately, most of us do not live in Nielsen households. Because many viewers feel frustrated when their viewing habits and opinions aren’t considered, we invite you to rate all of the fifth season episodes of Van Helsing here.

A Syfy post-apocalyptic drama series, Van Helsing, stars Kelly Overton, Jonathan Scarfe, Tricia Helfer, Aleks Paunovic, Kim Coates, Keeya King, Nicole Munoz, Jesse Stanley, and Jennifer Cheon. The show centers on Van Helsing descendent Vanessa “Van” Helsing (Overton), who awoke from a coma to find vampires had overtaken the world. A prime target for the vampires, she’s also humanity’s last hope with her immunity to vampires and her ability to turn them into humans. In season five, Vanessa, Violet (King), and Jack (Munoz) risk everything to finally bring an end to the Dark One, once and for all. The Van Helsings must figure out ways to escape and evade the various obstacles in their path to prevent them from their mission, leading to an epic final showdown between the Van Helsings and the Dark One.

What do you think? Which season five episodes of the Van Helsing TV series do you rate as wonderful, terrible, or somewhere between? Do you think that Van Helsing should be ending or renewed for a sixth season on Syfy? Don’t forget to vote, and share your thoughts, below.

Worst thing I have ever seen. Horrible writing, and acting.

#5FIGHTFORWYNONNAEARP
I think Syfy was dumb to give Van Helsing is season 5 it was Dumb and it wasn’t even worth watching but I know if they would give season 5 to a Wynonna Earp it would great ratings and it’ll be worth. Emily Andras make it Four Season 4 I made it one of the best TV shows ever

You were right. Up to the point you wanted more Wynonna Earp. That’s garbage too