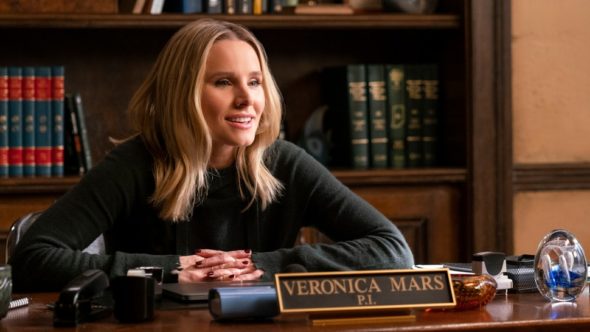 I would watch another season that would finish Veronica Mars with a good ending but at least finish it off do you know how frustrating it is to watch shows and they don’t finish it, it’s so disappointing

I would definitely watch another season of Veronica Mars. I love all of the show and the movie. I did not care for the finale although it definitely had the bang! surprise! impact. I do understand Rob Thomas’s reasoning for the ending, and I also don’t agree with it from a sentimental fan perspective. All of that being said, I would watch another season if/when it happens. 🙂

I love Veronica Mars, I never thought I would get into a teenie bopper show but my new found love for Kristen Bell si thanks to her wonderful husband Dax. Then all I had to do was watch about 3 episodes to know it isn’t just a teenie bopper show. I always want to see more

My house is split my sister thinks there is nothing without Logan.
I think you need to explore Veronica & Leo and/or Weevil. I do not think removing her from Neptune or the father daughter relationship that this show was built on is a good idea.

That being said I think we need a 5 season.

Hulu, have you learned nothing from your predecessor? Veronica Mars is a storyline the fans love and it is not over! Veronica has so much more to do. When it was originally cancelled, there was talk that it was due in part to where Rob was taking the story… Just trust in the fans and give this another season….. Or let it move to Netflix so it can have a shot there… Just don’t let it die again due to the arrogance of out of touch executives.