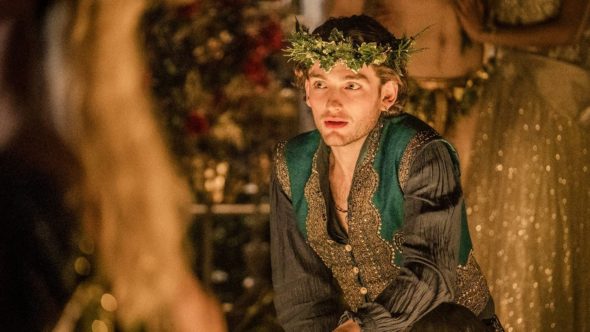 There is nothing either good or bad, but thinking makes it so. Has the Will TV show been cancelled or renewed for a second season on TNT? The television vulture is watching all the latest cancellation and renewal news, so this page is the place to track the status of Will season two. Bookmark it, or subscribe for the latest updates. Remember, the television vulture is watching your shows. Are you?

Airing on the TNT cable channel, Will stars Laurie Davidson as William Shakespeare. The cast also includes Olivia DeJonge, Jamie Campbell Bower, Mattias Inwood, Ewen Bremner, Colm Meaney, William Houston, Lukas Rolfe, Max Bennett, and Jasmin Savoy Brown. At just 24 years of age, with no social or political advantages, Shakespeare is willing to risk everything in pursuit of his dreams. He dives headlong into the fast and treacherous world of Elizabethan theater, trying to make it as a writer.

The first season of Will averaged a 0.11 rating in the 18-49 demographic and 383,000 viewers. Find out how Will stacks up against other TNT TV shows.

Will debuted with weak numbers for a TNT TV series and the ratings haven’t gotten better for this young Shakespeare series. It’s TNT’s lowest-rated scripted series so, unless there’s some special financial arrangement, I suspect that Will will be cancelled and not renewed for a second season. I’ll keep a hungry eye on the ratings and update this page as needed. Subscribe for free updates on any Will cancellation and renewal news.

9/5 update: Will has been cancelled; there will be no season two on TNT. Details here.

What do you think? Should TNT have renewed its Will TV show for a second season? How do you feel about the Will TV series cancellation? Let us know, below.

Very disappointing. This show was unlike any other on TV and was a great adaptation of William Shakespeare. I hope another station picks it up in the future. It could have gone so much further.

Bedazzle!!! It’s the perfect word for this show such a fresh and intriguing tale of the life of Will Shakespeare and Christopher (Kit) Marlowe. I was so sad when I read about the cancellation…just when a found a unique tv show in a sea of monotony

I too was so disappointed that Will has been canceled. It is edgy and engaging. The characters are unbelievably good actors. It was nice to have something on TV that was interesting and informative. I do hope that the powers that be will reconsider another season for Will. Give it chance.

Will was one of the few intelligent shows on TV – it was clever. I truly hope that some other network has more vision and picks it up. Please!!!!!

I absolutely adore this series…please say it has not been cancelled.

Say it isn’t so! This was SUCH a great series. Edgy, with youthful, photogenic stars, great acting—I’m surprised it wasn’t popular with the young adult demographic. Well, at least young women. 🙂 Unfortunately, i can see guys that age giving the show a pass, in favor of sports or mindless sitcoms. (SNOOZE.) I *hope* TNT gives WILL another chance. perhaps try a different day or time? Then advertise more widely! I had no idea it was on when I flipped channels 1 day. (Or maybe I saw advertised on another channel?) I frankly stopped watching TNT before because I thought… Read more »

This is/was the best thing onTV, period. I am crushed. Finally a show with intelligence. So of course, cancel it. Return to the vast wasteland.

I love this show. It talks about a time of Shakespeare’s life we know almost nothing about. I want more.

Will was original, intelligent, delightful, and whimsical! Needs to revived on a different network! Netflix, Hulu, Amazon? Adored the show, it will be missed, I hope they bring it back!

I’m so tired of anything with any intellect being cancelled. Yes I understand the need to rake in tons of cash. But can’t we just have one show that hasn’t been dumbed down for the masses? Hey execs there are people out there that watch TV that aren’t drooling imbeciles that need to be constantly jacked off by mass gun violence, explosions, and vapid tarts (male and female).
Can you just give us this one?

The junk du jour and insipid programming on TNT and TBS got picked up for new seasons so OF COURSE they canceled the true one gem amongst the garbage. If I had the power, I’d force the soulless executives at those networks watch People of Earth 24/7 for at least a month.
Then hand them all straightjackets.
You see, fellas, THIS is the trash you subject the public to, but an excellent and creative show like Will, nah, can’t have that. Gotta make room on the schedule for that planned People of Earth spin-off.
I shudder at the very thought.

Awwwwww Maaaaaaaaan!! I cannot believe they cancelled this show! So heart broken, disappointed, and upset. Love Shakespeare and was very excited for the launch of this show. Loved it from the very 1st episode and it just kept getting better and better. Was thrilled when I read an article in July that it had already been approved for a 2nd season and there was a possibility for a 3rd. I just saw the news that not only is that 3rd season a no go, but even the 2nd season has been killed. Way to burst our happy bubbles TNT! NOOOOOOOOOOOO!!!… Read more »

C’mon! Are you serious!? My daughter got me into this show and I love it! Can’t wait for it to come back on and then read its cancelled? I am so mad! Who makes these decisions? I hope this is not true and it comes back on because I really enjoy the young Will stories and how it all began.

please bring back will , a lot of show are not coming back bones, sleeply hollow and grim please not that

I just discovered Will only to find out it’s too late to hope for more. The wonderful actors, (JCB’s Marlowe standout) inspired storytelling and brilliant costume design needs to go on. TNT doesn’t deserve such quality work and hopefully another smart cable network will pick it up so it can be seen without its momentum killing commercials. It’s happened before, please let it happen again. Can’t wait to buy the series when it comes out.