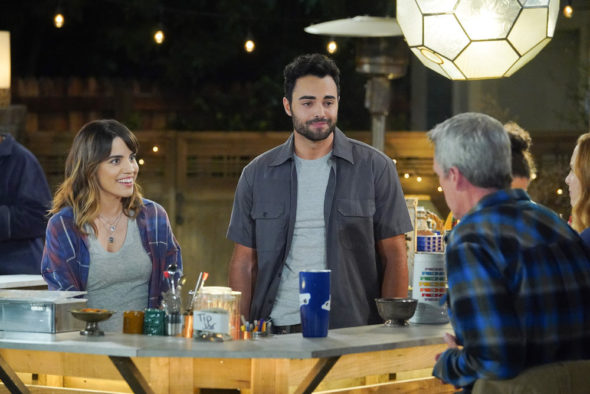 The bar is closed — permanently. NBC has cancelled the low-rated Abby’s TV show. It won’t be returning for a second seaosn.

A sitcom from creator Josh Malmuth, who executive produces with Michael Schur, Abby’s stars Natalie Morales, Nelson Franklin, Neil Flynn, Jessica Chaffin, Kimia Behpoornia, and Leonard Ouzts. In one way, it’s the first of its kind — a multi-cam comedy, filmed outside, in front of a live audience. The story unfolds at Abby’s, an illicit neighborhood bar, run by a former Marine Staff Sergeant, out of her (rented) backyard. Abby (Morales) runs a tight ship, but her regulars including Beth (Chaffin), Fred (Flynn), Rosie (Behpoornnia), and James (Ouzts) like it that way. Everything is smooth sailing until her landlady dies and leaves the property to her uptight newly divorced nephew, Bill (Franklin). Now Bill and Abby have to come to a meeting of the minds, but Bill’s inclined to make things work, because the place is already starting to feel like home — only less lonely.

Compared to the other scripted NBC TV shows of the 2018-19 season, Abby’s ranks 19th of 20 series in the demo and dead last in viewership.

Today, the Peacock Network also cancelled The Enemy Within and The Village TV shows.

What do you think? Do you like the Abby’s TV show on NBC? Would you have watched a second season of this barroom sitcom?

NBC evidently doesn’t remember another show about a bar that ended up dead last in the ratings in its first season, yet was renewed by a network exec who simply liked it. I felt like this could have developed into another one of those.

I love this show. I’ll hate to see it go.

I really enjoyed this show. Finally something different than the usual half hour comedy. Loved all the different characters in the show. Will be sad to see it go.

I loved this show. Finally something different than the usual half hour comedy. I’m really dad to see it go. I loved all the characters.

I loved it it was cheers set in the backyard

I loved this show. It wasn’t given a fair chance.

I really love this show!!!

My friends and I loved the show!! We would have watched a season 2!! Another good show NBC let go! bhbBS

I would have liked to see a second season. Neil Flynn is a very funny guy and I love him.
Think it could use better written storylines, but overall I enjoyed watching this little show.

Disappointed about The Village being canceled. Hope netflix picks it up.

The worst part about this show is the titled character Abby. Didn’t like the character at all. Fred should have been the bar tender. Abby was the least funny of all the characters. The premise of the show works but the jokes weren’t funny at all

Love this show! They didn’t give it a chance. So mad they didn’t move it to another night.

Not a funny show and I did not care for it. “Cheers” and “Horace and Pete” were set in bars and they were terrific but that genre may be used up. What I was hoping for was a decent workplace sitcom like “Taxi,” “Barney Miller” or even “MTMS” where guest performers as crazy customers/users come in the door but Abby’s did not get there.

Should’ve been cancelled after episode 1….Not a good show at all

I’m not too surprised.

I watched and enjoyed it but it did lack many really laugh out loud moments.