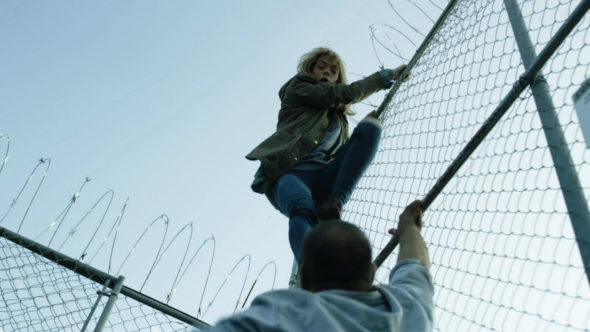 Is Rose’s journey over? Has the Black Summer TV show been cancelled or renewed for a second season on Netflix? The television vulture is watching all the latest TV cancellation and renewal news, so this page is the place to track the status of Black Summer, season two. Bookmark it, or subscribe for the latest updates. Remember, the television vulture is watching your shows. Are you?

Unless they decide to publicize viewership, it is difficult to predict whether Netflix will cancel or renew Black Summer for season two. A little bird recently told me that if Netflix hasn’t decided to renew a given series within 28 days, a cancellation is more likely. Now remember a decision isn’t an announcement, so that won’t always translate to the world knowing a show’s fate quite that soon. Also, since it’s no guarantee one way or another, I’ll keep an eye on the trades and press releases and update this page with breaking developments. Subscribe for free Black Summer cancellation or renewal alerts.

11/21/19 update: Black Summer has been renewed for a second season on Netflix.

What do you think? Are you glad that the Black Summer TV show has been renewed for a second season? How would you feel if Netflix had cancelled this TV series, instead?

Its a good show, should be renewed, I gave it a chance and it passed.

Great show I was waiting for the next great zombie show and black summer show that potential. It’s really cought my attention when I first started watching it. Cant complain I think it’s a good show.

Yeah, black summer catches the attention almost immediately and if the viewer is not careful it is likely they will binge it too quickly. Cole, Please tell me that English is a second language for you, that you are under ten, or have suffered severe head trauma. If not, please learn the language with a bit more accuracy before you attempt to engage it in written form for other’s consumption.

Please Pleaseeeee Season 2 !!! We need it !!! The whole show is genius and how its set up is genius !!! We need to know how the daughter made it in and if theres others inside !!!!

Need to see a Black Summer season 2! The nail biting action makes the Walkind Dead’s latest episode look like a soap opera. This seems fresh and you’re always waiting to see what is around the corner!

I loved black summer. I’m addicted to zombie apocalypse and vampire or horror type shows and this reaches my standards. What I don’t understand is that the show was about finding her daughter, she found her daughter at the end of episode 8 season 1. Id love to see a season 2 but I reckon they should’ve kept her daughter away for at least three seasons (just my opinion) but I will definitely be watching it when it comes back on.

Black Summer was absolutely fantastic! The writing, directing, acting — all top-notch! There has got to be a season 2! Make it happen — superb show!

I just wanna say that…. Want season 2 of black summer

Loved Season 1 of Black Summer, much better than Z nation. I want it to be renewed for Season 2. It’s full of suspense and genuinely feels tense and keeps you on the edge of your seat.

I love the show. I LOVE Jaime King!!!!!!! <3
The hipster dude that keeps getting separated is hilarious, poor fella can’t catch a break…or maybe he catches ALL the breaks!!! I’m cheering for ole chubby fella for sure. I really hope this show lasts a long time!

I enjoyed the show, Would love to see more. I love to see all the different ways people responded. I think you could easily expand that to other situation. I must have to many at one time because it seemed to be over to fast.

This show is REALLY REALLY AWESOME! It had is at the end of our seats. I really hope this keeps going and not stop at season 1.

I thoroughly enjoyed it! I would watch another season for certain.

Deserves a season 2,the daughter of Rose was at the stadium and there was no evacuation,Lance was on the run(again)
Son was looking for her mother so there is many openings for season 2
I enjoyed it would be great to see another season.

Please don’t cancel black summer as we like the this show. It has left us in much suspense and wanting to know what happens next. Totally like the TV show has lots of gripping moments in it. Need more good looking men tho. Really needs more drama and blood and guts but we do honestly really want to see more. We need to know about the families that are not at the stadium and where they are. Love the show don’t give up now as it’s only just started and looks really good just needs more episodes to answer many… Read more »

Black Summer certainly deserves a second season. It’s off to a good start, and personally I feel that it has the chance to be a successful series moving forward. I seldom find a series worthy of binging and entire season in a single day, but I did just that with Black Summer. I’m also an avid TWD fan, and BS (given the chance) could become one of my top 3 favorite series. Please don’t cancel.

I don’t agree with everything that was said, but I do agree it should be renewed for Season 2.