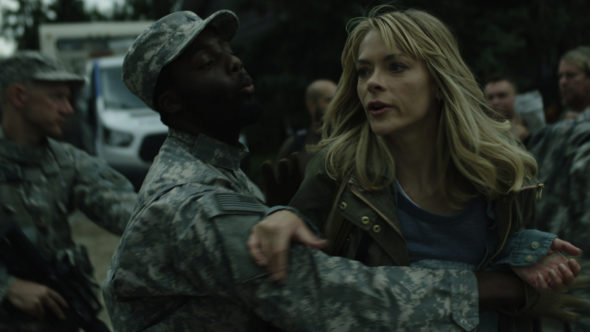 How goes the fight against the undead horde during the first season of the Black Summer TV show on Netflix? As we all know, the Nielsen ratings typically play a big role in determining whether a TV shows like Black Summer is cancelled or renewed for season two. Netflix and other streaming platforms, however, collect their own data. If you’ve been watching this TV series, we’d love to know how you feel about the Black Summer season one episodes. We invite you to rate them for us here. *Status update below.

What do you think? Which season one episodes of the Black Summer TV series do you rate as wonderful, terrible, or somewhere between? Should Netflix cancel or renew Black Summer for a second season? Don’t forget to vote, and share your thoughts, below.

*11/21/19 update: Black Summer has been renewed for a second season on Netflix.

U actually loved Z Nation and Black Summer at one point I couldn’t wait to see what’s next on Z then I found out it wasn’t renewed I’m still heart broken so plz sende what I need to keep good shows like Z-Nation & Black Summer going longevity style … Plz think of bringing back Z-nation I truly loved what rack actor brought to their characters they were all my favorites, esp. since Murphy stopped shinning … Zonya Knox a.k.a. Z-Nation !!!

Such an amazing show! Do not listen to the people who say otherwise, we NEED more seasons please! My favourite show by far that i’ve ever watched I think!

this show was basically unwatchable, episode 6 and 7 we’re filmed in the dark so you had trouble even knowing what was going on. In an earlier episode where a guy saw a dog his right hand was so badly torn up he couldn’t put a key in the ignition of a vehicle. 5 minutes later he’s in a grocery store filling a cart up with food and his hand is all better, not bandaged, the injury was completely gone. Then in the last episode they did something I hate they had magic guns that had unlimited number of bullets

I disagree highly, it was very good and we need more like this. Your probably just used to seeing things like this done more differently, but hey it’s not for everyone! :”D

Okay so this show had potiential until that curly headed white chubby guy couldn’t care to as a character to actually do anything productive. Like kill a zombie!!!

I really wanted to like this show but it is terrible, poor writing, acting, continuity, I could go on!
Hard to believe the people behind this show also made the fantastic Z Nation.

I think it should definitely be renewed. There’s a lot of not so good shows on Netflix and I liked this one. I hope it isn’t like Z-Nation. We are all ready for something new and FRESH!

Loved this show! Me and my daughter binge watched!