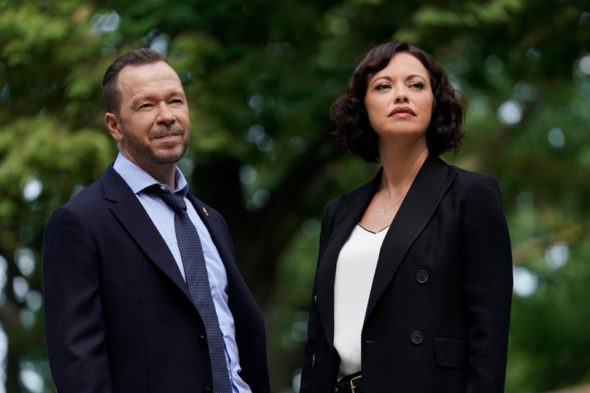 The 10th season of Blue Bloods is averaging a 0.65 rating in the 18-49 demographic and 7.68 million viewers. Compared to season nine, that’s down by 18% and 9%, respectively. Find out how Blue Bloods stacks up against other CBS TV shows.

What do you think? Are you glad that the Blue Bloods TV show has been renewed for an 11th season? How would you feel if CBS had cancelled this TV series, instead?

I love this show! Watch all the reruns that I missed before getting hooked on it! If it is cancelled I will be heart broken!! Go Reagan’s!!!

Blue Bloods is loved here in the UK and it’s one of the best TV series shown. My family and I have watched every episode from the start, we are so addicted we have purchased all of them on DVD. If it does end we’ll have to start all over again. That’s fine by me.

Blue Bloods is the best show on network TV, I’ll be very unhappy when it comes to a end

I am glad blue bloods have been renewed for another season.

Best show to watch. I look forward every week to watch it.

Greatest show on television hands down. Never missed one episode. I practically had a meltdown watching the finale oh my! Crying ugly for sure yelling at my TV TELL HIM FRANK
I SOBBED

I love this show. Blue Bloods is one of the best programs ever seen on TV. Please do not cancel this program.

I love all the series of Blue Bloods. It’s wholesome and always has good messages for audience to take note. Please don’t cancel it due to the Current ugly anti cop climate.

I Love Blue Bloods. It is one of the few wholesome shows on TV these days and should never be cancelled.