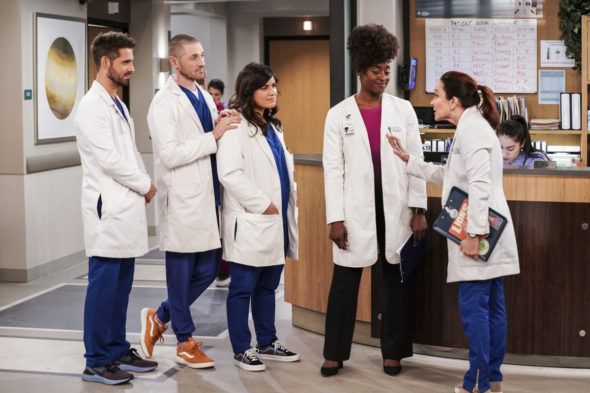 Looks like Carol’s Second Act won’t actually get a second act. CBS just announced they’ve cancelled the TV show after only one season.

The Carol’s Second Act sitcom revolves around Carol Kenney (Patricia Heaton), a woman in her 50s who has embarked on a unique second act after raising her children, getting divorced, and retiring from teaching. She pursues her dream of becoming a doctor. The cast also includes Kyle MacLachlan, Ito Aghayere, Jean-Luc Bilodeau, Sabrina Jalees, Lucas Neff, and Ashley Tisdale.

What do you think? Have you seen Carol’s Second Act? Would you have watched a second season of this CBS TV series?

I think that was areally nice show no sex.or swearing

Well….we cannot believe this show was cancelled. It was a funny show! All of the cast members worked great together! What is it with CBS? Good shows get cancelled and not so wonderful shows are still on TV? Wow! Please CBS….please reconsider this show and give ‘Carol’s Second Act’ a Second Chance? Please? Well, (….sigh…), thanks for letting me vent here. ~ Peace, Marc

Yes, I liked the show and love Patricia Heaton

This is also a quality show , Patricia Heaton is a seasoned actress and has been on tv consistently for over 20 years!! So refreshing to watch a show that doesn’t pander too much to the current politically correct and innuendoes that are hard to watch with family! Give this show another year, it was just starting to come together. CBS , you have come up with several quality shows, that are fun to watch and have a few laughs, please keep it up. Don’t rethink and take them off, trust your instincts! Man with a Plan, Carols second act,… Read more »

This show is so much better than Unicorn. Why have you put on stupid reality shows and canceled a good funny show?

The show is also a lot better than all rise that garbage.

It was hard to get into. I wanted to like it so badly because of Patricia Heaton. I watched every episode and was looking forward to seeing Kelsey Grammar again. I do believe a second season was warranted to see if it took off. “Unicorn” is awful! Can’t believe they’re keeping that!

I am glad to know that I am not the only person to dislike Unicorn.

I love the Unicorn, it’s another great show with lots of heart. And it shows reality after losing a spouse, or a divorce after being married for a long time. I’m happy it’s renewed!

I enjoyed the show so much I bought it on amazon video before the season was over! Please do a second season I was so interested when her ex showed up at the end!!

I’m sorry to see Carol’s Second Act was cancelled. I’m not normally a Sitcom watcher but I really enjoyed this one. Good cast, enjoyable episodes, and the addition of Kelsey Grammer had me looking forward to Season 2.

Not surprising. One episode was difficult to watch. Too much was forced.

I really enjoy this show! Please reconsider. In my opinion, I think it was off to a slow start, but, as time went on it dramatically improved.

I enjoyed this show. But they always seem to cancel the good ones. I would have been a 2nd season watcher!

Just what I think too!! Bring it back people!!

I really liked that show and I am not a Patricia Heaton fan. Please bring it back for a second season.

Once again, they cancel a great show!

I really enjoyed that show! Too bad CBS is cancelling the only good sit coms that are on TV!

You are so right!!