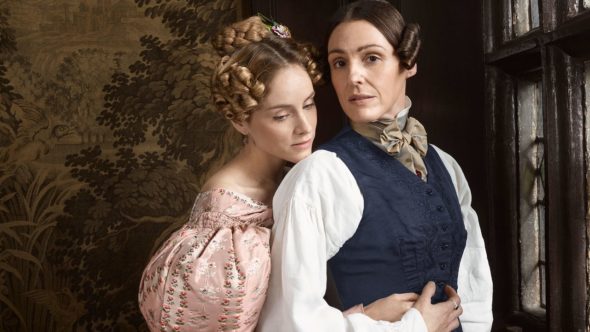 Gentleman Jack will be back for more adventures. HBO and BBC just announced they’ve renewed the TV show for a second season.

Based on true events, the historical drama centers on Anne Lister (Suranne Jones), who sets out to shore up Shibden Hall, her West Yorkshire family estate, by reopening the local Halifax coal mine and marrying well. The twist is, Lister does not intend to marry a man. The cast also includes Sophie Rundle, Gemma Whelan, Timothy West, and Gemma Jones.

The renewal comes as a bit of a surprise. Ratings for Gentleman Jack have not been the highest. So far, season one is averaging a .11 rating in the 18-49 demo and 401,000 viewers.

Nevertheless, the HBO series has received critical praise and gained a vocal fanbase. You can read more about the renewal below:

Following the show’s April debut, the HBO/BBC drama series GENTLEMAN JACK, produced by Lookout Point, has been renewed for a second season, it was announced today by HBO and the BBC.

“We’re thrilled that Anne Lister’s story has resonated so powerfully with audiences in the U.S. and abroad, and we’re grateful to Sally Wainwright and the entire GENTLEMAN JACK family for bringing her story to life,” says Francesca Orsi, executive vice president, HBO Drama Programming. “Anne’s journey is an important and courageous one and we can’t wait to share this next season with the world.”

Created, written and co-directed by Sally Wainwright (“Happy Valley,” “Last Tango in Halifax”), and starring BAFTA Award winner Suranne Jones (“Doctor Foster,” “Save Me”), GENTLEMAN JACK concludes its eight-episode first season Monday, June 10 (10:00–11:00 p.m. ET/PT). The series tells the story of Anne Lister, a woman who had a passion for life and a mind for business, and bucked society’s expectations at every turn.

“It’s so exciting that so many people have had such a positive response to Suranne’s exuberant performance as the brilliant, life-affirming Anne Lister and to Sophie Rundle’s beautiful performance as her courageous partner, Ann Walker,” says Sally Wainwright. “I’m utterly delighted that we’ve been recommissioned, because there are so many more big, bold stories to tell about Anne Lister and Ann Walker. A massive thank you to the BBC and HBO and to everyone at Lookout Point.”

“I’m so thrilled that I will be joining Sally Wainwright on the second part of Anne’s journey,” observes Suranne Jones. “We always dreamed there would be more, and now we get to play it all out. A huge thank you to the BBC, HBO and Lookout Point for giving us our second series. It’s such amazing and positive news. I love working with the brilliant and talented Sophie Rundle and can’t wait to create some more Lister and Walker moments with her too.”

“GENTLEMAN JACK exudes sass and originality, and has been a huge hit with our BBC One audience,” notes Piers Wenger, controller of BBC Drama. “We look forward to continuing Anne Lister’s journey with Sally, Suranne and the rest of the team.”

“I’m thrilled that viewers have embraced Anne Lister with the passion and positivity that she deserves,” adds Lookout Point executive producer Faith Penhale. “Sally and Suranne’s achievement in bringing this remarkable and inspirational figure back to life has been quite incredible and we can’t wait to create the next chapter in Anne’s story.”

Set in the complex, changing world of 1832 Halifax, West Yorkshire — the cradle of the evolving Industrial Revolution — GENTLEMAN JACK follows Anne Lister, who is determined to transform the fate of her faded ancestral home, Shibden Hall, by reopening the coal mines and marrying well. But the charismatic, single-minded, swashbuckling Lister — who dresses head-to-toe in black and charms her way into high society — has no intention of marrying a man.

Based in historical fact, the show examines Lister’s relationships with her family, servants, tenants and industrial rivals and, most importantly, would-be wife. The real-life Anne Lister’s story was recorded in the five million words of her diaries, and the most intimate details of her life, once hidden in a secret code, have been decoded and revealed for the series.

Among the critical praise for the first season, the Hollywood Reporter hailed the show as “funny, smart and touching,” while the Wall Street Journal called it “utterly seductive” and the New York Times described Suranne Jones’ performance as “a marvel, exuding vitality, charisma and sexual confidence.”

What do you think? Have you seen Gentleman Jack? Will you watch season two?

My boyfriend and I love this show! I am so glad there will be a second season and I cannot wait to watch. I love the strength of Miss Lister and how daring she is to be herself in a time that was less than forgiving or understanding. Suranne Jones is absolutely perfect for the part and does an amazing job along with the rest of the cast. I love the ending of the first season, I cried happy tears and it is such a great love story.

I love this program. I am going to keep HBO so I can watch it For season two. The storyline is excellent and the acting is great.It makes it so much better that this is based on true events in the life of a real person, Ann Lister. I hope we have more shows like this..

I absoultely enjoyed the episodes Suranne Jones is a great actress and the supporting cast is fantastic . I love the setting, costumes and all the period recreation.
I look forward to the second season.

Absolutely breathtaking… A strong and vital contender for existing period piece series… from the writerto the actors to the costume designers to the lighting and sound and the music!!… It’s so well done from start to finish and I am THRILLED to see the next season! Congrats on the renewal – well earned and deserved by all involved!!

I LOVE , LOVE, LOVE IT! Perfect cast, awesome costumes. Everything about it seems so real. Thank You. Suzanne Jones, of Scott & Baily fame is magnificent!!! The directing appears flawless!

Absolutely i love the historical social view on sexualism

I’m behind on my Killing Eve!!

Loved every second of the Gentleman Jack series From me and would love another season and beyond. I’m totally engaged and find this series one of the most fascinating and captivating. Devoted fan!!

LOVE this show! So glad it’s coming back!

bkI will watch season two, to fifty. I am without a doubt loving this show. I cannot wait till the next show each week. The characters are played so well. Excellent in fact. The period cloths is fab. Suranne and Sophie are wonderful together. Almost magical I am so glad that the show has been renewed. Thanks to all the actors for their excellent performances.

watched it over and over. excellant acting, great story. had to buy the books about this extraordinary woman
will watch season 2

I watched a few episodes and although it is well cast, written, acted, plotted I just couldn’t connect with these characters. That being said I’ll tune in to watch the final episode to see how it ends.

ABSOLUTELY !!! SURANNE WAS SUPURB. HOW COULD YOU NOT FALL FOR HER.
THE REST OF THE CAST WAS EXCELLENT.WELL DONE. RIGHT DOWN TO THE COSTUMES. AND CARGUS