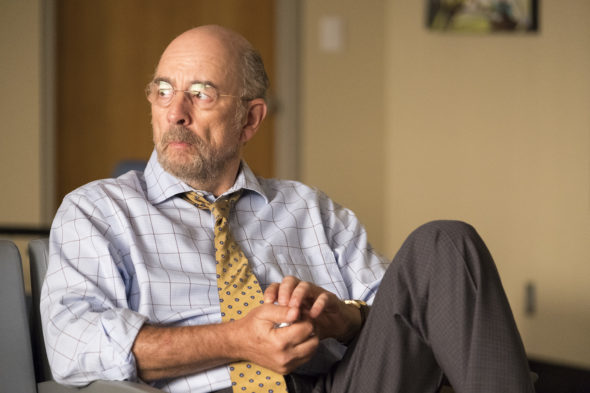 Is Dr. Shaun Murphy still on duty? Has The Good Doctor TV show been cancelled or renewed for a third season on ABC? The television vulture is watching all the latest cancellation and renewal news, so this page is the place to track the status of The Good Doctor, season three. Bookmark it, or subscribe for the latest updates. Remember, the television vulture is watching your shows. Are you?

The second season of The Good Doctor averaged a 1.12 rating in the 18-49 demographic and 6.73 million viewers. Compared to season one, that’s down by 37% and 31%, respectively. Find out how The Good Doctor stacks up against other ABC TV shows.

2/5/19 update: ABC has renewed The Good Doctor TV show for a third season.

What do you think? Are you happy that The Good Doctor TV show has been renewed for a third season? How would you feel if ABC had cancelled this TV series, instead?

What a great season ending episode! Credit to the writers for coming up with this plot.
Glad the Han character was fired, and Shaun back as surgeon, as well as Glassman finding happiness.

this is a great drama on so many levels. At a time when humanity, tolerance and intelligence are needed, The Good Doctor delivers all this and more with each episode. Thank you to the entire cast for a worthwhile experience. And thank you to the network for renewing a most exceptional show.

I think it a great show. But it could help if the good doctor get back to the ER. It could help DVDS sales. If they waited any longer it could hurt sales. Not viwers people will still watch it. But if he not in the ER next episode DVDS won’t sale until $5.00 instead of $10.50.

I love this show. Freddie does an excellant job. I cry so much for him. Please keep show going.

This the best show on television right now. We love it! Please do not cancel it.

This is a great, compelling show. It would be a tragedy to take something so uplifting off the air in this day and age. Please renew.

❤️ just wanted to say how much my fiancée jeannette and I love this show.. the cast is awesome and many episodes brings us to tears…and smiles and just a great show to watch… we love freddie’s Character he plays it so very good just as good as he did on bates motel.. all our love and support go out to the whole cast and crew.. thank you for such a great show… we look forward to seeing it again.. thanx guys …always david Desi macias jr and jeannette Widick from Kramer Nebraska… yeah that’s right Nebraska ❤️

This is just a plain and simple comment… i’m from Kramer Nebraska and my fiancée jeannette and I truly love this show.. Freddie does such an amazing job at acting and the rest of the cast are awesome as well such a very good show to watch and we hope that they have continued success now and in love he future keep the show alive… it touches our hearts❤️

The good doctor is a great show. Original and genuine- not easy with all those shows about doctors. A good mix of personal and medical themes. The actors have a good potential to get deeper. Freddie Highmore is really convincing and inspiring.

This is the only program that I consistently watch after my off duty as a nurse. I love the show.

I love this program. Please renew

This show is great and it has a lot of room to grow. Sure hope it doesn’t get cancelled. On the other hand, if the CDC doesn’t get there soon, all of your characters will be dead. And Shaun is on the floor immobilized by the sound of an overhead light, which is a little less than plausible, given the heroic actions he is capable of. Anyway, I’m sure the writers could sort it out. Bring in the heavy-hitter epidemiologists and vaccinate everyone. Voila! Problem solved.

Why is it that when a good show is on someone comes up with the stupid idea of cancelling it.
We (family) enjoy this show, great Actors/Actresses and writing.
Here is hoping this show does not get cancelled and another war/crime ridden show comes on.