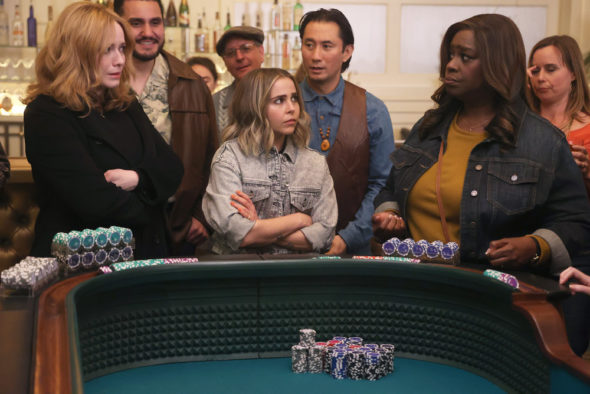 Good Girls was cancelled by NBC at the start of the weekend, and members of the cast reacted to the news on social media.

Christina Hendricks, Retta, Mae Whitman, Reno Wilson, Manny Montana, Lidya Jewett, Isaiah Stannard, and Matthew Lillard star in the NBC series which follows the crime spree of a trio of suburban moms. Netflix looked to be a possible new home, but a deal did not happen.

Check out the comments from the cast below.

The woman behind the casting for the show also reacted to the Good Girls cancellation news. Check out her post below.

What do you think? Were you shocked by the cancellation of Good Girls on NBC? Would you have watched a fourth season on Netflix?

Oh nooooooo! Please, someone pick this show up!!!

Love this show. Can’t believe they’re canceling this show, and keeping a lot of the crap their keeping. There are too many game and reality shows on TV that they could get rid of.

Yes I would have it’s a great show dont cancel good girls or manifest!!!!!

I love this show and would watch many more seasons.

I must be the only one who thought killing the ‘slow’ artist that made the 10 dollar counterfeit plates was over the line. We stopped watching after that episode. It was already getting darker and darker every week and hey I like dark comedy, too, but killing off an innocent character ‘just because’? Hard pass.

I thought that was a bit much also. Killing off the supermarket manager was funny, and he really deserved it, but you are right that the artist being killed was not a good plot twist, especially for a comedy, even a dark one.

Indeed, that guy was a creepy perv. Not only was his character no loss to the show, the writing and acting of his demise was terrific!

This is total B.S.!!!! You give us this great show that I’ve been watching since day one for the past 4 yrs. I’ve invested my time and my fascination with the characters and storyline totally in love with the girls totally in love with Rio, who is hot as hell!! I love this show I love Dean I love everyone and I love this show I cannot believe NBC or Netflix are not going to be showing this anymore!! cancellation??!! really?!!! Where are we supposed to go now that you meet us at best our time and a curiosity and… Read more »

So sad to see this one go! Had just got into it, watched all seasons and LOVED it! Why?!?!?

Is there still a last minute chance that HULU or even Peacock could pick up Good Girls?

Absolute BS! That’s what I think! So sick of losing good shows. 🙁

Why are you canceling The Good Girls series? You have so many other programs that are lousy and you should cancel!

NBC must really think they have spectacular pilots to put forward the way they are slashing and burning all their best shows. Hope it was worth it. Too bad there isn’t a reality show where we viewers could vote off all the executives making these terrible decisions.

One of the best Netflix series. A great plot, great actors and actresses. And I fell in love with Christina Hendricks lol. Makes me want to watch the whole seasons again

I will be so sorry to see this show ending good story plots, great actors, hope it will be picked up