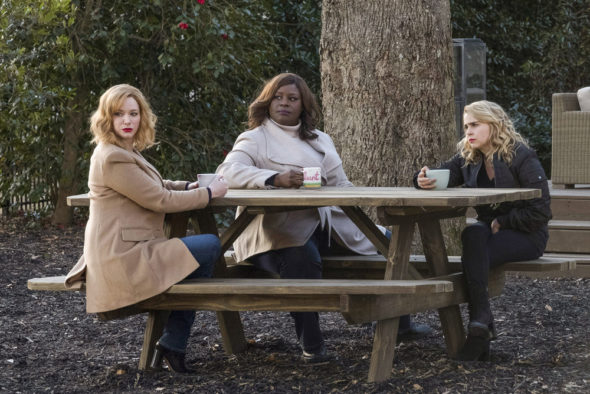 The good news is true. The Good Girls TV show on NBC is renewed for season two, with a start date TBD. For its first couple of episodes, the Jenna Banns dramedy did pretty well in the Nielsens for any scripted NBC TV series not named This Is Us. After that, it shed viewers for a few weeks, before stabilizing and ending up in about the middle of the pack. While it was renewed, this one could have gone either way.

A dark NBC comedy-drama, Good Girls stars Christina Hendricks, Retta, Mae Whitman, Matthew Lillard, Reno Wilson, Manny Montana, Lidya Jewett, Izzy Stannard, and David Hornsby. The action centers on three suburban mothers who have been struggling to get by. After a series of setbacks leaves them desperate, they decide to hold up the local Fine & Frugal supermarket, but their take far exceeds their expectations. Soon, they’re in deep with the local crime boss, and these “good girls” find themselves with a basket full of bad choices.

Good Girls: A Look at the Ratings

The first season of Good Girls averaged a 1.04 rating in the 18-49 demographic and about 4.49 million viewers. Find out how Good Girls stacks up against other NBC TV shows.

Although NBC has not yet issued a Good Girls second season renewal press release, Entertainment Weekly has confirmed the season two pickup.

What do you think? Are you a fan of the Good Girls TV series? Did you think NBC would cancel or renew this TV show for a second season?

Please bring back Good Girls, we love this show.

Please hurry and bring my FAVORITE new show back!!!! One of the best shows to come on tv in so long!! I love how these ladies get things done. HUGE FAN!!

Yes hurry up it seems that the show was off 2 lo g or im just over anxious. Good Girls Rocks!!!

Love it, glad it’s coming back….

Love Good Girls. Please don’t cancel it! It’s entertaining and keeps you hooked into what happens next.

I LOVE THIS SHOW!!!! I looked forward to every episode the story was great, nothing I’ve ever seen before, I am hooked!

Good Girls has something new to add on every episode and I love the program. Gutted when I discovered I’m upto date but excited to find out what happens next.Hurry up already and release some more episodes
Rates would give it a 4*

I love this show!!! I’m dying for a second season and I really hope there is more then 10 episodes. that was a let down… and I hope rio and beth get together because the sexual tension is killing me 🙂 where it left off, i hope she shoots dean. please hurry up and tell us when season 2 comes out! my favourite show on netflix

Luv the show Good Girls…hoping its renewed for a second season and more….

Love GoodGirls hope it will be back for second season

Awesome show!! Love it! Thanks for the new season so happy can’t wait to see more “Good Girls”!!!..

Thank you for renewing Good Girls, story line has improved, keep it
going for another three years, can’t wait to see it in reruns