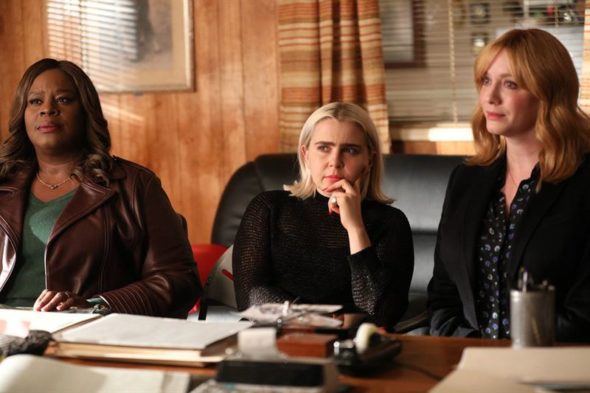 I love this show. I watch it live. I’m so happy to see that it will continue for another season!! Great comedic actors mixed with drama.

THE CHEMISTRY BETWEEN RIO AND ELIZEBETH IS OFF THE CHARTS. THIS SHOW NEVER DISAPPOINTS. LOVE LOVE THIS SHOW

I think the show is great! Fabulous cast and real life problems combined with a dark side. I look forward to each episode and am so happy that it was renewed for another season!!

I absolutely love this show and can’t wait for season 3. A great cast and great acting. Hope it is on for a long time.

LOVE LOVE LOVE IT!! Both my daughter and I watch it. We are so glad there will be a Season 3!!! Love Sexy Bad Man Rio… Women are super talented. Totally Love it!

I look forward to watching Good Girls. It is a dark comedy and there are no other shows like it being televised. I am 70 plus and like it.

I LOVE THIS SHOW!!!! Hope it has a looong run like Breaking Bad!!!! It’s amazing writing! LOVE the 3 women & Christopher! I look forward to finding out more of his story and hope that he and Beth will become more than partners in crime! Thank you NBC For renewing this great show! Looking forward to many many more seasons!

I love this show! So happy it will continue. Great twists and writing.

I love this show……pure “Gold”!! The actresses are all talented beyond compare!! The casting was perfect!!! You even love the bad guys!! HA!HA! Best twists and turns are great. Thank you all for this wonderful show……QUALITY!!!

I love this show! I have been waiting 1 full season for Rio and Beth to finally have sex!!! Omfggggg. You guys are killing me in suspense omggg I love this show. season 3 should be amazing! I’m surprised that this show got a low rating.

Maybe the ratings are low because we had to wait so long for Season 2. I love Good Girls but I won’t wait for Season 3 if it’s going to take another year to air.

This show makes my life “normal” as i enjoy and eagerly anticipate what’s coming next from these amazing women as they encounter, overcome and then suddenly try to get through subsequent surprises! The acting is realistic and the writing is crisp, fast-paced, funny and clever. What am i going to do until GG-Season 3 begins anew?

love this show! So excited it will be back for season 3!!!