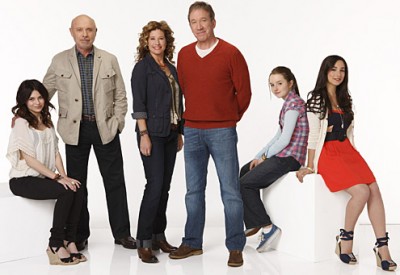 TV show description:
This TV series revolves around a guy who’s surrounded by women. Mike Baxter (Tim Allen) is a man’s man who doesn’t understand what’s happened to the world. These days, women run for president, serve in our military, and provide for their family while men sit in tanning beds and get their cuticles shaped. As the marketing director of a sporting goods store called Outdoor Man, Mike dedicates his life to reminding the world what makes men men. With the help of his co-workers Ed and Kyle, Mike uses his Outdoor Man video log to vent his aggression.

Mike’s dedicated wife is Vanessa (Nancy Travis). She’s a caring mother, grandmother, and a geologist who doesn’t let her husband get away with much. After taking a career break to raise her three daughters, Vanessa returned to work and quickly received a promotion. That leaves less time for her family and for taking care of Mike, much to his chagrin.

Kristin Baxter (Alexandra Krosney, then Amanda Fuller) is an independent 20-year-old single mother who’s constantly fighting the urge to take a nap. Between chasing around her baby son, Boyd, and working at a diner, she rarely has a moment to herself. Kristin recently moved back in with her family, which has allowed her the luxury of free child care and a few moments of much-needed rest.

Mandy Baxter (Molly Ephraim) is Mike and Vanessa’s self-centered 17-year-old daughter. She loves spending her father’s income and also uses her free time to updating her website, Mandyland, and going out for mani-pedis with her boyfriend. She can’t tell you who won the civil war, but she already knows who will win on The Bachelorette this season. Constantly connected, Mandy is always texting, blogging, and vloging.

Eve Baxter (Kaitlyn Dever) is the youngest, toughest, and most athletic Baxter daughter. She isn’t interested in clothes, make-up, or what her hair looks like and would rather play full contact football with the Broncos. Not surprisingly, she’s Mike’s little buddy.

Mike is employed by Ed Alzate (Hector Elizondo), the thick-skinned and opinionated owner of Outdoor Man. An old-school guy, he essentially wrote the book on how to live a man’s life. With his years of experience, Ed coaches Mike on how to handle his problems both at work and at home.

Working under Mike is Kyle, a charming, naive young man who’s desperately in need of a dominant male role model. At the store, he mainly performs mindless and humiliating tasks that no one else will do. His long blond hair and submissive personality may not make him first pick on the football field, but he holds his own at Outdoor Man.

What do you think? Do you like the Last Man Standing TV show? Do you think it should be cancelled or renewed for another season?

Love Tim allen in anything he does…and “LMS” is a classic…havent missed a show since it began…bring it back…there are millions of Tim Allen and Nancy Travis fans out there.
and the promise of more outstanding actors and actresses in the kids who play his Daughters and Kyle….keep it going !

Tim Allen is a great talent, and this is a terrific ensemble. There are plenty of terrible shows on TV to cancel, so don’t pick on this one!

I know that ‘Last Man Standing’ has not actually been cancelled yet, but that it is on the short list. I have watched every episode from the beginning and will continue to do so. Please don’t make us lose Tim Allen again. ‘Home Improvement’ was great and I had missed him in the years between that and this new one. ‘LMS’ is funny, has good characters and a good cast. (It may be a mistake to have Kristen move out: ‘at home’ interaction with her & Boyd will be missed.)

Please don’t cancel this show! It is one of the few that has “clean” comedy, and
does not rely on cheap jokes for laughs. Tim Allen has always delivered genuinely
funny and clever performances, and Nancy Travis is a perfect counterpart for
Tim, and truly funny in her own right. Kudos to the writers of the show, and to all the performers for their excellent delivery of the lines!! They are all perfect in their parts. Once again, please do not cancel this delightful series!

Great show, glad to see Tim Allen again. Was a HUGE fan of Home Improvement and really enjoy this show. Gives me faith in television, despite all of the dumbed down reality shows.

Has anyone else noticed the snide remarks made, indicating strongly that Tim Allen, the producers, and sponsors of this show are anti hard working, middle class Americans. The political overtones thrown in, praising Rebpulicans has left me cold. No one I know is watching it anymore. A shame last year it was very intertaining.

this show lost me 2 years ago!!! tim allen is overrated!!! First 2 season was fun but it became so political, I found myself hating this show!! It was not fun and i find myself want to PUNCH TIM AND THE YOUNGEST DAUGHTER IN THERE FACE!! I stop watching this craping show and what a surprise?!?!? fox pick it up!!!! I don’t watch fox or this crapping show

[…] Tim Allen, the second season of Last Man Standing kicked off to a 2.0 rating with 8.07 million viewers. Last Friday dropped as well, registering a […]

[…] season, Last Man Standing didn’t get great ratings and could have been cancelled. ABC renewed it instead. Will the […]

[…] There are some changes in store for the second season of the Tim Allen sitcom, Last Man Standing. […]

Last Man Standing has got to be one of the best new shows in quite a while!! Pure comedy, family life, realistic, , it’s probably the only show I now look forward to!!!!!

love last man standing ….. great show hope it is renewed for another season. tim allen is the best.. all the cast is great …..

I LOVE THIS SHOW ITS AWESOME I WATCH IT WITH MY FAMILY ALL THE TIME!!!

Find this show amusing. Nice to see Tim Allen back on the air.