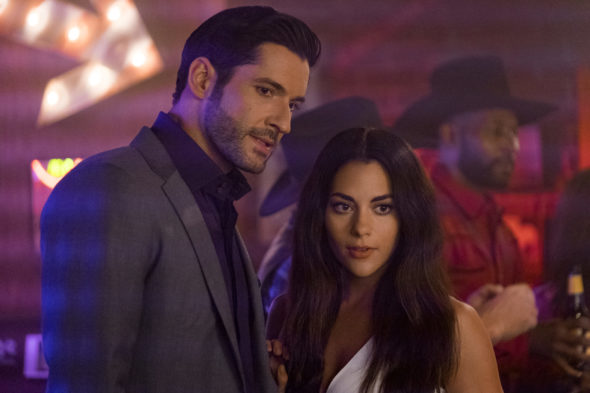 Lucifer may survive another final season. Netflix is looking to renew the series for a sixth season, and it will have the people in charge return as well. The showrunners, Ildy Modrovich and Joe Henderson, have signed deals to create a potential sixth season for the streaming service, per TV Line.

However, there is one issue. Tom Ellis has not signed for a new season of Lucifer yet. Talks between the actor and Warner Bros. Television are currently underway though. The Netflix series still has a fifth season ahead, but it might not be the final season after all.

A premiere date for season five has not yet been set, but the season will have 16 total episodes, and it will air in two blocks of eight. That gives Netflix plenty of time to work out a deal with the devil.

What do you think? Are you hoping for more seasons of Lucifer?

Tonight is my first time seeing this show. I love it, please keep it going!

It makes me so happy that there will be a sixth season. Please get Tom Ellis on board. Love him!

We came THISCLOSE to losing this fantastic show when FOX cancelled it. Thank God (or should I say, ‘thank dad’???lol) the brilliant, wonderful people of Netflix saved it!!! First, we got a brilliant season 4. Then, we learned we were getting a season 5, which later turned into an EXTENDED season 5! Now we’re talking a possible season 6??? Netflix, i love and adore you for keeping this show on the air and I’m TRULY appreciative…but PLEASE PLEASE PLEASE pay /give Tom Ellis whatever he wants to do a season 6!

I love the series so much that I can’t see anyone else playing the main characters parts! They are real people to me! The tension I go through with wanting their love to finally happen but then I would lose that tension…excitement.. anxiously wanting to view RIGHT NOW (!) because I can’t wait for next hour to be released..
I’ve been hooked from day one!

No Tom Ellis…not Lucifer! He’s the one that makes the show!

Yes I would love to see more of Lucifer

Awesome show ! I agree, you have to keep Tom Ellis. In order for the show to continue, which is what I would love to see, He has to stay.

A 6th season is a no-brainer! Just don’t promote any political agendas in this show. So many shows and films have been permanently ruined by that mistake. Don’t ruin this show!

Just so you know: In my opinion, Tom Ellis is absolutely irreplaceable. You can’t switch him around like you can the James Bonds. It won’t work. Others could conceivably be “written out” of the story in some way (some more easily than others) – but you can’t successfully replace the devil.

Actually it could be possible as much as I love Tom Ellis Lucifer can change his appearance at will and can come back as anybody! But I too would like to see Tom Ellis continue!

I love this show! I would love another season! Season 6 bring it on!

One of the most interesting enjoyable shows out there. All the Actors and the characters they portray are great. More, more, and more of this, please.

I’d love for the show to keep going.