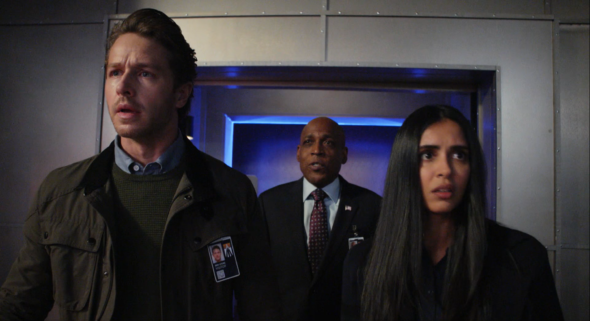 Will we get more answers in the third season of the Manifest TV show on NBC? As we all know, the Nielsen ratings typically play a big role in determining whether a TV show like Manifest is cancelled or renewed for season four. Unfortunately, most of us do not live in Nielsen households. Because many viewers feel frustration when their viewing habits and opinions aren’t considered, we invite you to rate all of the third season episodes of Manifest here.  *Status Update Below.

An NBC action-drama series, the Manifest TV show stars Melissa Roxburgh, Josh Dallas, Athena Karkanis, J.R. Ramirez, Luna Blaise, Jack Messina, Parveen Kaur, Matt Long and Holly Taylor. After a turbulent but routine flight, the crew and passengers of Flight 828 disembarked to find the world had aged more than five years. Their friends, families, and colleagues had given up hope of ever seeing them again. Now, faced with the impossible, the passengers’ dreams of a second chance at life evaporate as they encounter imminent dangers surrounding them, both tangible and unexplained. In season three, new challenges will test the Stone family’s trust of “the callings” and each other. Sticking together is more important than ever because no matter what happens, it’s all connected.

What do you think? Which season three episodes of the Manifest TV series do you rate as wonderful, terrible, or somewhere between? Do you think that Manifest should be cancelled or renewed for a fourth season on NBC? Don’t forget to vote, and share your thoughts, below.

Manifest is great entertainment. One of the best shows in recent years. Please ensure that there are more seasons of Manifest.

Don’t cancel manifest it is a 10/1o show

DO NOT a cancel MANIFEST!!! Or NETFLIX please pick it up. This is an excellent intelligent entertaining show. NBC you cancel this and will replace with a game show which is awful. Every network is showing game shows – I hate it. There are no scripted shows to watch on network TV anymore. PLease keep intelligent scripted shows like Manifest on NBC. We’re streaming more and more shows because if the programming.

Please do not Cancel this show. It is one of the best on television. They are keeping Greys anatomy on other channels and I use to be a fan but it is time for it to go. This show is the best. Please find another place to put it.

I can not believe they are cancelling this show especially with the cliffhanger that was left in season 3. My 19 year old son and I planned our Thursday nights around this show. It’s a shame that this has been done. I hope netflix picks it up because it is the top 10 on there. Please put it on netflix or another channel

Please RENEW it! I love Manifest show very much!!!!

I need a season 4 of Manifest!! Please don’t leave us hanging like this!

It NEEDS to be renewed!