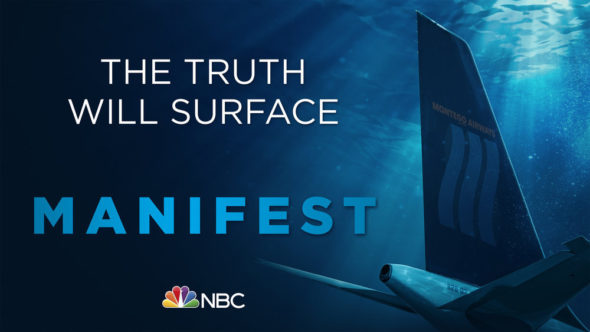 The series creator has a six-year plan for the Manifest TV series but are the ratings good enough to support that? Will Manifest be cancelled or renewed for season four (and beyond) on NBC? Stay tuned. *Status Update Below.

An action-drama series, the Manifest TV show stars Melissa Roxburgh, Josh Dallas, Athena Karkanis, J.R. Ramirez, Luna Blaise, Jack Messina, Parveen Kaur, Matt Long and Holly Taylor. After a turbulent but routine flight, the crew and passengers of Flight 828 disembarked to find the world had aged more than five years. Their friends, families, and colleagues had given up hope of ever seeing them again. Now, faced with the impossible, the passengers’ dreams of a second chance at life evaporate as they encounter imminent dangers surrounding them, both tangible and unexplained. In season three, new challenges will test the Stone family’s trust of “the callings” and each other. Sticking together is more important than ever, because no matter what happens, it’s all connected.

For comparisons: Season two of Manifest on NBC averaged a 0.68 rating in the 18-49 demographic and 3.90 million viewers.

What do you think? Do you like the Manifest TV series on NBC? Should it be cancelled or renewed for a fourth season?

*8/28/2021 Update: Netflix has revived Manifest for a fourth and final season.

Really hate to see the show leave. BUT… I’m happy Netflix will pick it up

This was an unfortunate cancellation. I wasn’t aware the show was on network till I texted a friend and he said “yeah, it’s too bad they cancelled it.” I was getting ready to cancel Netflix when I ran across it on their platform just before the cancellation. Fell in love right away. Had to stop watching once I found out it got canceled and wouldn’t be picked up. Can’t blame Netflix, it wasn’t doing well on the network, but looks like my reason for keeping my subscription just ended.

Manifest is an interested movie love to see season 4

Manifest is a great show. My family, kids and I loved it. There needs to be a season 4. How can they end it like this!.

So very unfair to put the brakes on this fantastic show. NBC should rethink on this one. I want to know what happens next and I want to know on NBC. Not some other network thank you very much!!! We are counting on your change of heart!!! Please deliver!!