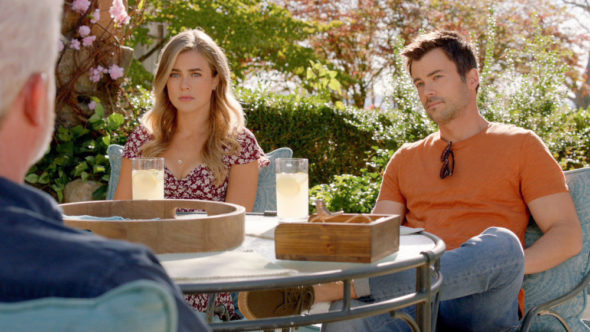 Are enough viewers sticking with this show? Has the Manifest TV show been cancelled or renewed for a fourth season on NBC? The television vulture is watching all the latest cancellation and renewal news, so this page is the place to track the status of Manifest, season four. Bookmark it, or subscribe for the latest updates. Remember, the television vulture is watching your shows. Are you?

Airing on the NBC television network, the Manifest TV show stars Melissa Roxburgh, Josh Dallas, Athena Karkanis, J.R. Ramirez, Luna Blaise, Jack Messina, Parveen Kaur, Matt Long, and Holly Taylor. After a turbulent but routine flight, the crew and passengers of Flight 828 disembarked to find the world had aged more than five years. Their friends, families, and colleagues had given up hope of ever seeing them again. Now, faced with the impossible, the passengers’ dreams of a second chance at life evaporate as they encounter imminent dangers surrounding them, both tangible and unexplained. In season three, new challenges will test the Stone family’s trust of “the callings” and each other. Sticking together is more important than ever because no matter what happens, it’s all connected.

The third season of Manifest averaged a 0.47 rating in the 18-49 demographic and 3.09 million viewers. Compared to season two, that’s down by 31% in the demo and down by 21% in viewership. Find out how Manifest stacks up against other NBC TV shows.

Will NBC cancel or renew Manifest for season four? This show doesn’t deliver great traditional ratings but I think it does well enough with streaming and delayed viewing for it to potentially be renewed. It’s a co-production of Warner Bros. and NBCUniversal. If it’s cancelled, I think NBC will try to bring the story to a conclusion (ala Timeless’ wrap-up finale). I’ll update this page with breaking developments. Subscribe for free alerts on Manifest cancellation or renewal news.

8/28/2021 Update: Netflix has revived Manifest for a fourth and final season.

What do you think? Are you glad that the Manifest TV show has been renewed for a fourth season? Will you be watching on Netflix?

please bring back Manifest, great show, it needs an ending