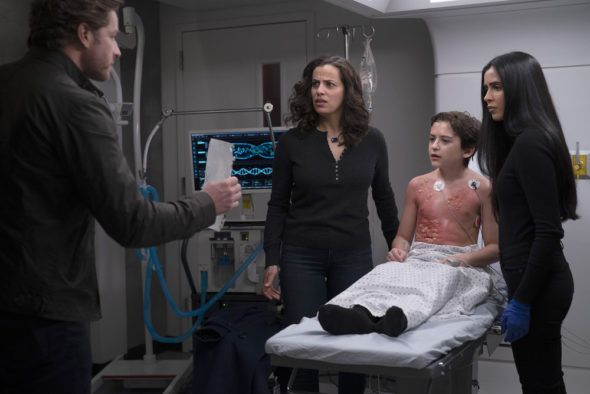 Manifest may be saved after all. Warner Bros. TV is working with the cast and writers of the series on new contracts for a possible revival by Netflix, per Deadline.

In June, Netflix opted not to save the cancelled NBC series. However, Manifest’s continued success on the streamer caused Netflix and NBC Universal to rethink the show’s future. A renewal by NBC or a pick-up by Peacock were explored, but those options are now out. Netflix is still very interested.

A fourth season would give fans closure after a cliffhanger season three finale. It is not known if more seasons would follow if the series is picked up by Netflix.

What do you think? Are you a fan of Manifest? Would you watch a fourth season on Netflix?

Yes, I love the show

I enjoy watching Manifest! I’m happy there will be a Season 4

PLEASE continue the series. I can’t believe some of the ridiculously boring shows that are kept on air while great ones like this are cancelled.

Yes, I would and can’t wait for it to come back! One of the best shows I’ve seen and definitely like it better on Netflix than Peacock! I love that every episode was thrilling and couldn’t wait until the next one!

I do subscribe to Netflix and a big fan of Manifest… so YES!!

Yes, I would like to see another season of Manifest!

Yes , it will be a great Idea if they continue with the Original plan of the six season , off course I will watch it , can’t wait for it. And for the entire cast they do such a great work , keep it up.

PLEASE continue MANIFEST…the Story has not yet ended…at least give us a good ending Netflix! What really happened to those passengers on Flight 828! We must have an ending! PLEASE give us a final Season where all is explained!

I love Manifest. Continue it.