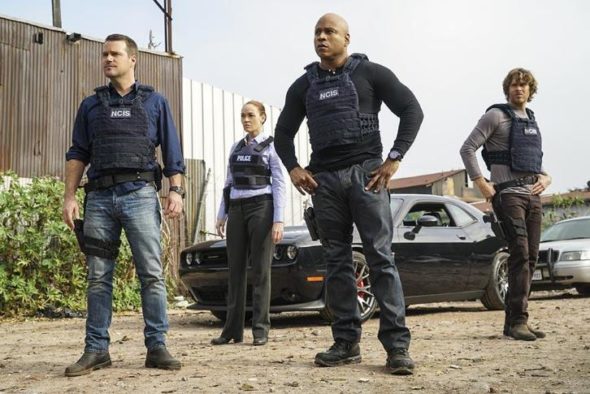 Many fans were concerned when CBS moved NCIS: Los Angeles to Sunday nights. Would the show be cancelled? Well, the fans can relax for another year. The network has renewed the crime drama for a ninth season that will air during the 2017-18 broadcast season.

While the start times for season eight episodes have been messed up because of NFL game over-runs, it looks like NCIS: Los Angeles may be benefitting. Season eight is averaging a 1.36 rating in the 18-49 demographic with 10.30 million viewers. Compared to season seven, that’s up by 3% in the demo and up by 19% in total viewers. Most network shows are down, year-to-year.

NCIS: Los Angeles currently ranks as CBS’ eighth highest-rated scripted series (out of 26 shows). It’s no surprise that the network has renewed it. CBS has also renewed NCIS and NCIS: New Orleans for the 2017-18 season.

What do you think? Do you like the NCIS: Los Angeles TV show? Are you glad that this CBS series will return for a ninth season?

I love this show. And so glad it has been renewed again. Hope the cast will be the same. This is my number 1. Of all the NCIS shows. And all other shows

Love NCIS: LA so much we have seasons 1-7, will buy 8, but NOT happy with writers treatment of Michele!

We love this show and watch it every week.Them interference with time because of football games was a pain but we stuck with it.
Our hearts bleed for Sams loss of his tv wife in the show. Hope the writers have some good stuff planned to keep the show fascinatjng.

I love this show! I’m so happy they are approved for 9th season! It’s already not many good shows on tv now, so knowing that it’s staying the world is all right to me.

I like the show. It’s one of the few filtered, non excessively violent police investigation programs available on the screen. I sit, I watch, I enjoy. I definitely would love to have this show go one for years to come.

I am so glad to see that the show has been approved for another season. It would be a real loss to the fans if we lost it, or any more of the cast. My only complaint is the the two channels that were carrying NCIS LA marathons were taken off the air…cloo and esquire. Can USA, ION, or oxygen not add it or replace NCIS with LA sometimes?

Excellent, anytime is ok! We all have the internet. Who cares about B-ball, F-ball or the lame stream media. NCIS LA, NCIS, & NCIS NewOrleans ARE THE BEST.

Please move NCISLA TO A LATER time…too much sports on that I miss it. At 8 or 9. Would be perfect. PLEASE

This has been my favorite show from the very beginning, but became even more my favorite show when Eric Christian Olsen became a regular in season 2. I will watch this show whenever it plays and I have every season on DVD. Luckily I get it on Global in Canada and it is never delayed by sporting events. I m so very happy that there will be a season 9 and hoping for a season 10 as well!

I like ncis la. G Callen is my best charachter. And Ncis la is my best serial. I would like to have at least 14 seasons.

CBS is a very slick organization.. Whenever (and it seems always) a sports program runs over its allotted time viewers that are waiting to see the Sunday night regular programming are forced to watch the end of the sports show AND COMMERCIALS in order to determine how to reschedule their preferred program. As long as NCIS LA has the following it has I think CBS will keep it on Sunday nights.

I agree totally. It might even be okay if CBS had any handle on the length of the sports games that are broadcast So that NCIS LA can start as per the schedule. It seems to me that the sport games run longer due to the commercial/tv time outs CBS adds to the games.

A show that really deserves to be renewed. How about that.