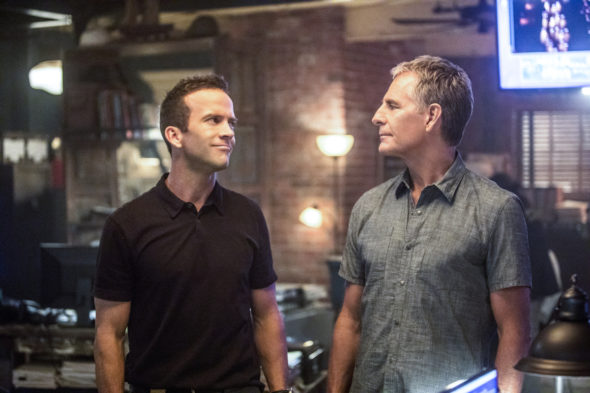 What’s next for Special Agent Pride and team? Is the NCIS: New Orleans TV show cancelled or renewed for a fifth season on CBS? The television vulture is watching for the latest cancellation and renewal news, so this page is the place to track the status of NCIS: New Orleans, season five. Bookmark it, or subscribe for the latest updates. Remember, the television vulture is watching your shows. Are you?

The fourth season of NCIS: New Orleans averaged a 0.96 rating in the 18-49 demographic and 8.86 million viewers. Compared to season three, it is down by 19% and down by 8%, respectively. Find out how NCIS: New Orleans stacks up against the other CBS TV shows.

Will CBS cancel or renew NCIS: New Orleans for season five? The ratings have remained pretty consistent so I predict it will snag a fifth season renewal. I’ll keep a hungry eye on the ratings and update this page with breaking developments. Subscribe for free updates on any NCIS: New Orleans cancellation or renewal news.


What do you think? Are you happy that the NCIS: New Orleans TV series has been renewed for a fifth season? How many more seasons do you think this CBS TV show should run?

I want to continue watching this show BUT they really need to get away from story line always trying to get pride out. That gets old

This show is terrible. I used to like it in season one, but now it is dreadful. The continuous storylines with Pride always in the middle of being taken down by some corrupt person. We just got rid f the mayor and now we are starting over again with someone else. Please, give me a break. The story is old and tired. Plus, Vanessa Ferlito aka Tammy is the worst. She was not that great on CSI NY when she was on that show and when I saw she was going to be on this show I cringed. I wish… Read more »

I love Scott Bakula, but these people are the worst actors, or maybe it is the writing but it is awful.

Totally disappointed that the relationship between Percy and LaSalle did not play out. They would be great together . Hope there is a way to bring her back.

I meant to say they DO have chemistry & I’m they’ll find someone great to replace Shalita!

Everyone’s entitled to their own opinion! If we all loved every show none of them would ever be cancelled which isn’t possible without that happening. However this shouldn’t be 1 of them! I’ve watched both NCIS & NCIS New Orleans since the beginning & I’m partial to this even after watching all 15 seasons of the original & hope it airs for many years to come as well. I just watched tonight’s episode 19 & it stinks that Shalita Grant left the show. In my opinion they DID have great chemistry together! I’ve looked but there’s no info on who… Read more »

Love the show! The actors have great chemistry and the plots Keep you glued to the TV for every moment. please renew this show many seasons to come. it is one of the great shows that TV has to offer

Love the show! The actors have great chemistry and the plots and story lines are keep you glued to every moment. Please keep this on for many seasons to come! This is one of the great shows tv has !

My husband and I love this show. there is so much chemistry between actors, family caring feeling. excitement looking to solving the crime, we love the New Orleans back grounds since it beings back memories when we vacationed there. KEEP IT!!!

This is my favorite show so I hope it stays on. But I am getting a little tired of Pride’s feud with Hamilton. Can we have a new storyline, please?

Please, PLEASE keep NCIS New Orleans on! It is one of the best shows on television for a long time!!! The chemistry between each and every one of the characters has never been better!

Renew! Love this season getting to know the characters background while solving crimes and love the Pride storyline. And don’t forget PerSalle!

Cancel it already, the newer cast sucks. The story lines are absolutely pathetic, and the fact that Pride is constantly breaking the law, he does not follow any rules, in the real world he and his staff would have all been fired. The shows is totally UNBELIEVABLEY horrible.

Sorry you don’t like it but aren’t all of the shows on television more wishful thinking and fantasy? Our group loves this show, what we can’t stand is shows like Bacholor and that Survivor nonsense!

Well. In that case you should do what i do with shows i don’t like (and there are a lot of them) :
Don’t watch them. I don’t See why they should cancel it just because you don’t like it. The only question that should matter is : “How many People DO like the show” and I am one of them 😉

Have you heard if pride will be coming back after the checkmate II episode????? I can’t find anything on here about it… Thanx

Cancel it. I cannot tell what they are talking about anyway. The cast do not appear to ‘gel’ together apart from Scot Bakula and CCH Pounder. These last two actors are far too good to waste time on such a weak script and dreadful storylines. Also the constant theme of New Orleans is grossly overdone. It is almost as if the producers need to continually convince their viewers that the programme is based there.

I guess we all have different tastes in TV shows, I and all of my family & friends not only love this show, but we often discuss it at work too!We love it!