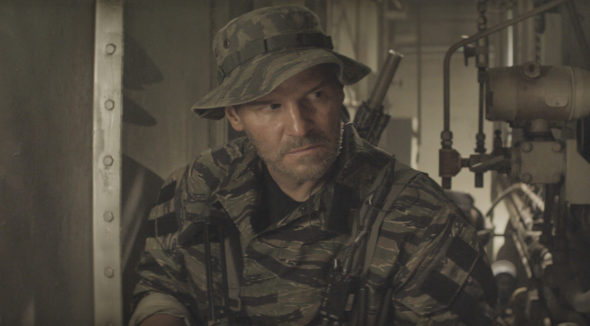 SEAL Team has wrapped its fifth season on Paramount+, and now viewers are wondering if they will see a sixth season. The series moved from CBS to the streaming service after four seasons but four episodes of season five were shown on the network in the fall.

Boreanaz said the following about the future of the series in an interview with TV Insider:

“I can’t say. What I could just say is that we’ve done great for Paramount+. You look at the numbers and the streaming, and then we’ve been trending as one of their number one shows for the past few weeks. So we’re doing good for ’em.”

When asked how long he plans to stay with the show, Boreanaz said:

“I don’t know. I think for me, it’s really relative to the stories that we’re telling and I’m excited more so about the switch to Paramount+. I find that that of all the streaming networks, this is a very positive one and they’re very aggressive in the way they do their shows. I still feel like this show moving over there and the potential of going on to another season and whatnot, the show won’t be drastically different, but it will have a slower burn to it. It’ll be more of like what happens in two weeks over a 10-episode order. It’s not just this huge season of — we don’t have to invest so much in certain areas of the storylines, but it may be like, hey, they get up, and this is their day and that’s 10 episodes. It’s very similar to like a 24 kind of aspect, but you really get to really now get under the skin of the characters, see where these men and women are and see how they’re affected from when they wake up to when they go to bed. I think that’s fascinating.”

What do you think? Do you want a sixth season of SEAL Team on Paramount+? Would you watch the series if Boreanaz departed?

Please do not remove the only show I look forward to at 70 yrs. old seen many shows most favd. but to wait till Oct. is awful all the reruns from first episode 1234 have been removed from Paramount at least we could watch them u have the original Star Trek Old Movies so why remove what we pay extra to watch not right!

The Seal Team is one of the best shows I have seen. The way the 5th season, I can’t imagine who survived. If they cancel it, they will make a Huge mistake!!!

Seal Team is the reason I subscribed to Paramount +. It was a good decision overall since my local CBS station chooses what it want’s to show and I miss some show viewings. Just wish for the shows that are CBS on air, they would be on Paramount + sooner and I don’t have to wait to the next day sometimes.

thank-you Paramount I,m addictted to them just the thought of ant of them dying is awful during the baby shower love the drama scene never missed a show but itwould be nice if you would put the reruns back on so I have something I love CBS is Sat. twice never know stay Clay has to be there if Jason retires to comander at war office