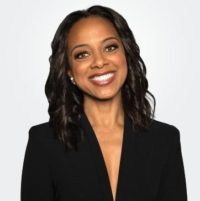 CBS is heading home with Secret Celebrity Renovation. The network has ordered the new hour reality series which will follow celebrities as they repay a deserving person from their past with a home renovation project. The show will be hosted by Mischelle Turner (right) and participants will include Eve, Wayne Brady, Chris Paul, and Emmitt Smith. Contractor Jason Cameron and interior designer Sabrina Soto will be helping with the renovations.

CBS hasn’t announced a premiere date but if you can’t wait, tonight, HGTV kicks off a second season of Celebrity IOU, a popular program with a similar premise. Secret Celebrity Renovation might appear to be a knock-off of that show but it seems that the CBS series is more likely an extension of Superstar Renovation from 2018 which followed sports stars giving back.

CBS has ordered SECRET CELEBRITY RENOVATION, a new one-hour reality series that gives celebrities in sports, music and entertainment the chance to gift a surprise home renovation to a meaningful person who helped guide them to success. Celebrities participating in making these heartfelt gifts include GRAMMY®-winning artist and host Eve (THE TALK); actor and comedian Wayne Brady (LET’S MAKE A DEAL); NBA All-Star Chris Paul; Pro Football Hall of Fame running back Emmitt Smith and more.

Hosted by Nischelle Turner (ENTERTAINMENT TONIGHT), the series will feature the design team of home improvement contractor and television personality Jason Cameron (“Man Cave,” “While You Were Out”) and interior designer Sabrina Soto (“Design Star,” “Trading Spaces”) who set out to help celebrities show their appreciation with a special renovation gift to a meaningful person from their hometown.

“Behind the lights and glamour, actors, musicians and athletes are real people who wouldn’t be who or what they are today without some help along the way,” said Executive Producer Robert Horowitz. “Returning to their hometowns for a heartfelt walk down memory lane to thank a special person in their lives gives every episode of SECRET CELEBRITY RENOVATION so much depth and emotion.”

Nischelle Turner is an Emmy® Award-winning correspondent and weekend co-host for five-time Emmy® Award-winning show ENTERTAINMENT TONIGHT. She is also an award-winning journalist and a contributor for CNN where she is featured in entertainment segments on “CNN Newsroom,” “New Day,” “CNN Tonight,” among others. Turner often lends her voice to entertainment and political news of the day, along with joining their coverage on the GRAMMYS®, Golden Globes® and OSCARS®. In addition, Turner was featured in multiple episodes of THE YOUNG AND THE RESTLESS, on the Network.

As an avid sports fan, Turner’s passion and knowledge came in handy when she joined Fox NFL Sunday as a sideline reporter for national football broadcasts in 2007. In addition to covering football, Major League Baseball and basketball for Fox, Turner became a host for “Extra on Essence” in 2009, an online entertainment show focusing on Hollywood’s most elite stars. Turner also has served as a freelance reporter and host for KNBC. Follow Turner on Twitter and Instagram: @nischelleturner.

Jason Cameron is a licensed home improvement contractor, finish carpenter and TV personality. A native of Toledo, Ohio, Jason worked his way through Northern Michigan University as a carpenter, and in 1999 moved to the Northern Jersey/New York City area where he continued using his carpentry skills and obtained a general contractors license to help make ends meet while pursuing an acting career.

For three years, Jason was one of the carpenters on TLC’s “While You Were Out.” He went on to host DIY Network’s “Desperate Landscapes,” “America’s Most Desperate Landscapes,” “Man Caves” and “Sledgehammer.” Jason also worked as a fitness model and spokesman for Men’s Health Magazine and appeared on the pages of Men’s Health, Men’s Fitness, Maxim and GQ, as well as the cover of Muscle Media. Follow Cameron on Twitter and Instagram @jcamerontv.

Sabrina Soto has been featured on “The Today Show,” “Good Morning America,” “Rachael Ray,” “The View,” and THE TALK, on the Network. She’s also appeared in publications such as TIME, Elle Decor, People, Huffington Post, InStyle, Esquire, USA Today, Parade, Variety, Better Homes and Gardens, Latina and The New York Post, among others.

Sabrina has enjoyed extensive exposure as host and designer of various HGTV shows such as “The High Low Project,” “Design Star,” “Real Estate Intervention” and “Get it Sold.” She’s also made guest appearances on “White House Christmas,” HGTV’s “Green Home,” “Bang for Your Buck,” “House Hunters,” “Showdown,” “Buying & Selling Secrets,” and served as a judge on the ABC series “The Great Christmas Light Fight!” Most recently, Sabrina can be seen as one of the designers on HGTV’s “Ty Breaker” and was one of the new designers on the reboot of TLC’s hit design show “Trading Spaces.” Follow Soto on Twitter @sabrinasoto and on Instagram @sabrina_soto

What do you think? Do you plan to check out the Secret Celebrity Renovation TV series when it eventually launches on CBS?

Yeah another reality show is all we need. Networks don’t get why their ratings are low.

No thanks… hosts that don’t know diddly about construction don’t interest me one bit.

I would if I could get station back I wish the issue with Direct T.V. would be solved soon.

CBS with a blatant copy of celebrity IOU. Always funny on Celebrity IOU how excited the people are to see the Property Brothers show up. They will push Brad Pitt out of the way to meet the guys.