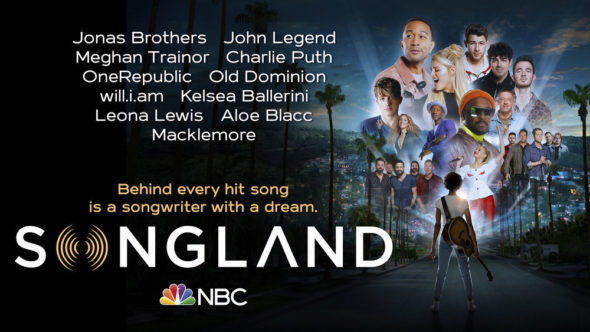 Is the first season of the Songland TV show on NBC music to your ears? As we all know, the Nielsen ratings typically play a big role in determining whether a TV show like Songland is cancelled or renewed for season two. Unfortunately, most of us do not live in Nielsen households. Because many viewers feel frustration when their viewing habits and opinions aren’t considered, we’d like to offer you the chance to rate all of the season one episodes of Songland here. *Status update below.

An NBC talent competition, Songland features successful singers looking for unknown songwriters to pen their next hit. In each episode, four songwriters perform their original tracks before successful musical producers Ester Dean, Ryan Tedder, and Shane McAnally, and the guest artist of the week. The artist then narrows the field to three writers, each of whom works with one of the producers to arrange their song to serve the artist. By episode’s end, the artist selects a song to record for a global release. In the first season, guest artists include: Jonas Brothers, John Legend, Charlie Puth, Meghan Trainor, will.i.am, OneRepublic, Kelsea Ballerini, Macklemore, Aloe Blacc, Old Dominion, and Leona Lewis.

What do you think? Which season one episodes of the Songland TV series do you rate as wonderful, terrible, or somewhere between? Should NBC cancel or renew Songland for a second season? Don’t forget to vote, and share your thoughts, below.

I absolutely love this show. I love getting to know the artists better! I am in the 65+ age range

The most realistic show. Love songland brings tears to my eyes every week tears of joy for each contestant picked. Don’t ever cancell

One of the best shows on tv. It’s about time someone created a show that goes behind the scenes and shows songwriters to the world. I’ve downloaded most of the songs so far and look forward to every episode. Thank you

I love Songland!! It’s the one show that I’ve looked forward to watching this summer. Please don’t cancel it!!

I love Songland . Its the one show that I’ve looked forward to watching this summer. Please don’t cancel it!!

I absolutely love Songland! What a great show! I love watching how a song is written for each singer. 10 episodes is not enough! The Season needs to be longer & not split up. Next Season please give us more episodes! Thank You!

Songland is a great show and an excellent venue for our up and coming gifted Artists! Love it ! Please don’t cancel this exciting show! We need to spread the word about it, publicize it more. Watching these young people grow as Artists is just wonderful. I do hope the show gets better and better as the Voice did, improving each season, perhaps showing us how the new Artists are growing in their fields. So interesting to anyone who loves music! This show was such a terrific idea!

Love Songland! Wasn’t sure what to expect, but most of song writers competing are excellent musicians. Ryan Tedder of One Republic is my nephew (my sister’s son) so I am very happy to support whatever he does in music. That said, if the show didn’t rise to the occasion, I would give an honest review. Quality matters!

Very unique and absolutely gave me a bit more knowledge on how songs actually come to life. You get to really see each artist’s style and point of view. If you love songs or singing in general, you can appreciate how words in a song can make you feel or bring you back to a moment in time.

LOVE IT and it gets better every week!!!! would love to see follow ups on how the song writers who’s songs were chosen are doing with their success.

I absolutely love this show, its brilliant!

I love watching Songland. It is interesting to see how a song is put together. Great show, do not cancel!!!

I absolutely love this show. I find it fascinating and entertaining. Please renew!

I love Songland! I can’t wait see it every week.

I didn’t care for this show. Changed the channel after the first 15 minutes,